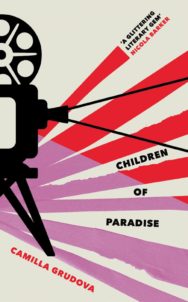 When Holly applies for a job at the Paradise – one of the city’s oldest cinemas, squashed into the ground floor of a block of flats – she thinks it will be like any other shift work. She cleans toilets, sweeps popcorn, avoids the belligerent old owner, Iris, and is ignored by her aloof but tight-knit colleagues who seem as much a part of the building as its fraying carpets and endless dirt. Dreadful, lonely weeks pass while she longs for their approval, a silent voyeur. So when she finally gains the trust of this cryptic band of oddballs, Holly transforms from silent drudge to rebellious insider and gradually she too becomes part of the Paradise – unearthing its secrets, learning its history and haunting its corridors after hours with the other ushers. It is no surprise when violence strikes, tempers change and the group, eyes still affixed to the screen, starts to rapidly go awry…

Camilla Grudova lives in Edinburgh where she works as an usherette. She holds a degree in Art History and German from McGill University, Montreal. Her fiction has appeared in The White Review and Granta. Her critically acclaimed debut collection, The Doll’s Alphabet, was published in 2017. This is her first novel.