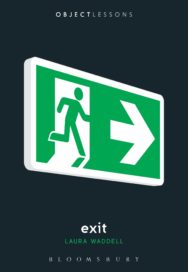 Object Lessons is a series of short, beautifully designed books about the hidden lives of ordinary things.

Exits are all around us. They are the difference between travelling and arriving, being on the inside or outside. Whether signposted or subversive, personal or political, choices or holes we’ve fallen through, exits determine how we move around our lives, cities, and the world.

What does it really mean to ‘exit’? In these meditations on exits in architecture, transport, ancestry, language, garbage, death, Sesame Street and Brexit, Laura Waddell follows the neon and the pictograms of exit signs to see what’s on the other side.

Object Lessons is published in partnership with an essay series in the The Atlantic.

Laura Waddell is a writer and publisher based in Scotland. In 2019 she won a Write to End Violence Against Women Award for her column in the Scotsman newspaper. She currently sits on the editorial board of Gutter magazine. Her cultural criticism and fiction have appeared in the TLS, Guardian, Kinfolk, McSweeney’s and several anthologies as well as on BBC Radio 4 and BBC Scotland. Exit is her first book.