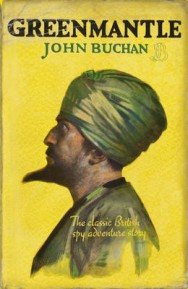 It is 1915. Richard Hannay is convalescing from wounds received fighting in France, when he is approached by Sir Walter Bullivant of British Intelligence. Bullivant’s son has been working undercover in the Middle East. It seems that the Germans with their Turkish Allies are planning to stir up a revolt in the Muslim world that could leave Egypt, India and North Africa in disarray. The boy has since been killed. The only clue he left behind is a piece of paper bearing the words ‘Kasredin’,’cancer’ and ‘v.I’. Hannay must take up the trail. At stake could be the outcome of the war. Buchan is a master of the spy genre, and this astonishingly prescient and gripping story of danger and adventure has stood the test of time.

John Buchan, 1st Baron Tweedsmuir, was born in 1875 in Perth, Scotland. He studied at Glasgow and Oxford Universities and turned to politics shortly after graduation, reaching the position of Governer General of Canada when he died in 1940. During the First World War he worked as a war correspondent for The Times, before joining the British Army Intelligence Corps, where he wrote speeches for Sir Douglas Haig. His experience of war left him vehemently opposed to armed conflict. He wrote many novels, poems, biographies, histories and works of social interest but is most famous for his Richard Hannay novels, The Thirty-Nine Steps and Greenmantle.