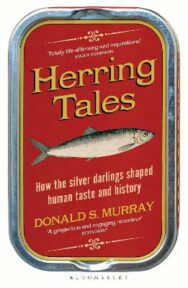 A lighthearted and informative narrative about the history of herring and our love affair with the silver darlings.Scots like to smoke or salt them. The Dutch love them raw. Swedes look on with relish as they open bulging, foul-smelling cans to find them curdling within. Jamaicans prefer them with a dash of chilli pepper. Germans and the English enjoy their taste best when accompanied by pickle’s bite and brine.Throughout the long centuries men have fished around their coastlines and beyond, the herring has done much to shape both human taste and history. Men have co-operated and come into conflict over its shoals, setting out in boats to catch them, straying, too, from their home ports to bring full nets to shore. Women have also often been at the centre of the industry, gutting and salting the catch when the annual harvest had taken place, knitting, too, the garments fishermen wore to protect them from the ocean’s chill.Following a journey from the western edge of Norway to the east of England, from Shetland and the Outer Hebrides to the fishing ports of the Baltic coast of Germany and the Netherlands, culminating in a visit to Iceland’s Herring Era Museum, Donald S. Murray has stitched together tales of the fish that was of central importance to the lives of our ancestors, noting how both it – and those involved in their capture – were celebrated in the art, literature, craft, music and folklore of life in northern Europe.Blending together politics, science, history, religious and commercial life, Donald contemplates, too, the possibility of restoring the silver darlings of legend to these shores.

Reviews of Herring Tales: How the Silver Darlings Shaped Human Taste and History

The story is told with great charm, and tinged with a spirit of loss and yearning. * Philip Marsden, The Spectator * Mr Murray is a gregarious and engaging raconteur as he flips between the diverse aspects of this versatile little creature. * The Economist * This is a splendid book, filled with passion, wit, and wonderful facts. * Geographical magazine * …a fine, scholarly, restless and keen-brained work. — John Macleod * Scottish Review of Books * It's a fascinating book and worth a read. * The Glasgow Herald * Like the herring, this is a book that darts across time and oceans. It gleams with story. A wonderful read. — Sally Magnusson These herring tales are far more tasty than you might expect. * The Scotsman * Donald S. Murray takes us to places we've never been before as he explores the world of herring in a sweet, pellucid, often poetic prose. — Jay Parini Herring Tales offers a fascinating view of the coastal cultures of northern Europe, of how a 12-inch fish has affected human activity there for hundreds of years. * Philip Marsden, The Spectator * Murray's account of the herring industry has almost as many facets as his slippery subjects have scales … and offers fillets of history, culture and zoology, with an emphasis on the eclectic. * The Economist * Herring Tales is the story of close-knit communities based around a particular kind of fishing, a world that is both present and, alas, fading. I strongly recommend this eloquent and finely detailed book. — Jay Parini Murray is one of my favourite authors in any genre, and this quirky book on how the "silver darlings" shaped human taste and history doesn't disappoint. * Guardian * Murray mixes folklore, personal reminiscence, cookery… and intertwines herring culture with political history. — Brian Morton * Times Literary Supplement * After reading author, poet and Gaelic playwright Donald S Murray's quirky book you may never look at the humble herring in quite the same way! * Countryside * It provides interesting facts and observations about the fish and fishing industry, it's historical and economic impact, some amusing anecdotes, and even a couple of Woody Allen jokes. * Countryside * Who knew fermented fish could be so much fun? — Anna Burnside * Daily Record * The herring is an unsung hero in the tale of the land and the sea. Its trade brought prosperity, but herring fishing brought misery and loss too. In his lyrical voice Donald Murray sings this tale so we can fathom its depths. And, as is always the case with good poetry, all of it is true. — Huib Stam, author of Herring: A Love Story Search as you might, you may be reasonably assured that no other subject of the Emperor Herring will publish a better book about the reign of the silver darlings. 'Herring Tales' is a glorious piece of non-fiction … a fast, lively, funny and altogether irresistible book. 'Herring Tales' is a tour de force. It may not bring the shoals back, but it will immortalise their memory. * West Highland Free Press * Donald weaves a herring tapestry as beautiful and as intricate as a piece of Harris Tweed. * The New Shetlander * Coated in oatmeal and fried, kippered or pickled or eaten raw, the herring is the best of fish, and Donald Murray's social, economic and cultural history of the herring fisheries of northern Europe is worthy of it, rich in observation, reflection and anecdote. It's an entrancing work in which learning is worn lightly and an all but vanished way of life is brought vividly before us. There's the taste of the sea in the herring and in this book. — Allan Massie A rare and precious book which is both erudite and humane. Herring Tales takes a humble, overlooked phenomenon and shows how all of life is interwoven with it. Totally life-affirming and inspirational. — Ewan Morrison A fascinating, vividly written account of the role of the herring in the history, culture, folklore, festivities as well as cuisine of life all over the North Sea. The canvas is wide, and the author looks at Ireland, Scotland, Iceland, Norway, Holland, with an unexpected glance at Italy thrown in. An informative work and an enthralling read. Donald Murray shows that there is more to the herring than an accompaniment to a plate of chips on a Saturday night after an evening at the pub. — Joseph Farrell It is a fascinating read – written with wit and a deep rooted understanding of the subject. * fallonsangler.net * This delightful book celebrates the strong cultural bond between herring and human. * Daily Mail *