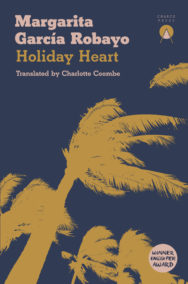 Lucía and Pablo are Colombian immigrants who’ve built their lives together in the US yet maintain conflicting attitudes towards their homeland and the extent to which it defines their identity. After undergoing fertility treatment, Pablo finds himself excluded from raising their twins, and the new family situation seems to question the very nature of their relationship and of who they believed they were.

In search of respite and time to reflect, Lucía takes the kids to her parents’ apartment in Miami. Meanwhile, Pablo learns he is suffering from a syndrome known as ‘Holiday Heart’. But is this just a break, or is it really the final days of their marriage?

From internationally acclaimed author Margarita García Robayo, and following the success of Fish Soup (selected by the TLS as one of the Best Books of 2018), comes this visceral dissection of the American Dream. With subtle, cutting humour she depicts the prejudices and snobbery of this immigrant family, and the selfishness and vulnerability of a couple whose emotional exhaustion has driven them apart. An acutely observed novel on displacement, the complexities of class and racism, and the end of love.

Margarita García Robayo was born in 1980 in Cartagena, Colombia, and now lives in Buenos Aires where she has worked as a journalist and scriptwriter. She is the author of three novels, a book of autobiographical essays and several collections of short stories, including Worse Things, which obtained the prestigious Casa de las Américas Prize in 2014. Her books have been published widely and praised in Latin America and Spain and have been translated into several languages, including Chinese, Hebrew and Turkish. Holiday Heart is her second book to appear in English after the very successful Fish Soup, selected by the TLS as one of the best fiction titles of 2018.

Charlotte Coombe is a British literary translator, working from French and Spanish. Her translation of Abnousse Shalmani’s Khomeini, Sade and Me (2016) won a PEN Translates award in 2015. She has translated authors such as Marvel Moreno, Anna Soler-Pont and Asha Miró, Edgardo Nuñez Caballero, Rosa María Roffiel and Santiago Roncagliolo. She is also the translator of Eduardo Berti’s novel The Imagined Land (2018). For Charco Press, she has translated three titles, namely: Ricardo Romero’s The President’s Room (2017), and Margarita García Robayo’s Fish Soup (2018) (Shortlisted for the Valle Inclán Translation Prize in 2019) and Holiday Heart (2020). For more information, you can peruse her portfolio and blog.