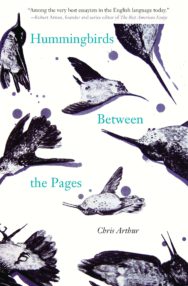 Hummingbirds Between the Pages

In his latest collection, Hummingbirds Between the Pages, prizewinning Irish essayist Chris Arthur muses on subjects ranging from Charles Darwin’s killing of a South American fox to the carnal music sounding in a statue of the Buddha, from how Egyptian seashells contain echoes of World War II to a child’s first encounter with death. Whether he’s looking at skipping stones, old photographs, butterflies, the resonance of a remembered phrase, or being questioned at an army checkpoint during Northern Ireland’s Troubles, what gives these unorthodox meditations their appeal is the way in which—with striking lyricism—they tap into unexpected seams of meaning and mystery in our everyday terrain. Arthur explores the moments that have left him spellbound, tying his own experiences as a young boy from Ulster who saw his first hummingbirds in London to the wonder felt by early settlers to America who sent pressed hummingbirds across the ocean to the communities they had left behind. Through rumination on the seemingly quotidian, Arthur’s lyrical prose exposes new layers of possibility just beneath the surface of the expected.

“Will appeal to readers who enjoy pondering the extraordinary implications of everyday objects and events.” —Library Journal

“Arthur displays his gift for taking the humblest of objects in hand or most ephemeral of thought-strands in mind and mining invaluable meaning from a shaft as deep as the imagination.” —World Literature Today

“Together these essays take on a near-cosmic view of how we got here and where we are going. It’s a stunning collection that reveals a depth and nimbleness of thinking that is a joy to read.” —Shelf Awareness

“In Chris Arthur’s masterful, elegant essay collection Hummingbirds Between the Pages, expansive and granular meditations on time, language, nature, mortality, and Northern Ireland capture wonder in the everyday. . . . Through singular phrasing and meticulous descriptions, these essays return again and again to the unlikely miracle of being alive.” —­­­Foreword Reviews

“Among the very best essayists in the English language today.” —Robert Atwan, founder and series editor of The Best American Essays

“In these reflections on memory, mortality, and history, Irish essayist Arthur exhibits a well-trained ‘magpie-eye’ for the telling fact or detail that seems trivial but contains a greater significance. . . . Arthur is a gifted observer, and these finely crafted essays will surprise and delight.” —Publishers Weekly

“The essay, in Chris Arthur’s hands, proclaims its outsider status, its subversive momentum, its effortless inclusivity and freedom from trammels of the imagination, attaining an embodiment which is civilized, idiosyncratic and rare.” —Times Literary Supplement

Chris Arthur is author of Irish Nocturnes, Irish Willow, Irish Haiku, Irish Elegies, Words of the Grey Wind, On the Shoreline of Knowledge and Reading Life.  These essay collections make a substantial contribution to the canon of contemporary writing in this genre.  Although largely unnoticed in his native Ireland, Arthur’s work has been gaining increasing attention on the international stage with critical acclaim in the United States, Australia, Brazil, Canada, France, Great Britain, Japan, Sweden and elsewhere.  In addition to his books, Arthur’s essays have appeared in a range of literary journals including Irish Pages, The Literary Review, North American Review, Orion, Sewanee Review, Southern Humanities Review, Southwest Review, the Threepenny Review, and Wasafiri.  His work has also been included in The Best American Essays.  He is recipient of various awards including the Akegarasu Haya International Essay Prize, the Theodore Christian Hoepfner Award and the Monroe K Spears Essay Prize.