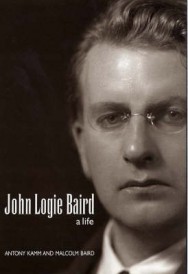 In January 1926 John Logie Baird was the first to publicly demonstrate real television. He is also attributed with many other pioneering developments, including the first transatlantic transmission, the first working video recording system, fibre optics, infra-red scanning and facsimile transmission. During his lifetime and since, Baird has been praised and he has been reviled. This thoroughly researched and balanced biography, written in part by Baird’s son, takes a fresh look at Baird’s life – his struggles with ill-health and lack of funding, his long-term romance, and the facts behind his own autobiographical memoir, published in 1988. Special treatment is also given to Baird’s troubled relationship with the BBC, in particular the role played by the corporation’s director general Sir John Reith, and the background to the boardroom coup which resulted in Baird being relieved of his duties as managing director of the company which he had founded. By reviewing existing sources and examining fresh evidence, the authors present a readable and faithful account of Baird’s astonishing life, and throw new light not only on Baird himself but on many of those associated with him.Much of the documentation from family and other archives, and many of the photographs, have never before been published. Technical details are described in non-technical language, supported by diagrams.

Reviews of John Logie Baird: A Life – A Personal Biography

'In the future when people wish to look up the facts of his life and achievements I believe it will be to this remarkable book that they turn first.' Michael Bennett-Levy, BVWS Bulletin'Kamm and Baird – the latter the inventor's son – tell their tale dispassionately, and amidst their careful coverage of the complex technological and business history of Baird and television manage to paint a strikingly clear portrait of the inventor who started it all.'Russell A Potter, The Historical Journal of Film, Radio and Television

Antony Kamm is a writer and former Lecturer in Publishing Studies.Dr Malcolm Baird, son of John Logie Baird, is a former chairman of the Chemical Engineering department, McMaster University, Ontario.