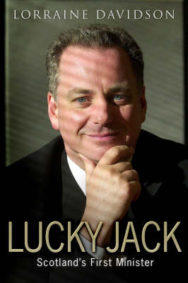 Brought up on Arran, the son of a shepherd, Jack McConnell started his working life as a maths teacher. He got into local politics during the ’80s, serving as treasurer and then leader of Stirling Council. Since then, he has steadily climbed his way up through the ranks to the most powerful job in Scottish politics. Along the way, he quickly learned that essential skill of modern-day politics – how to use spin to personal advantage. However, throughout his career, McConnell has never been too far away from controversy. He has often seemed to lurch from one political scrape to another, some of which have come close to signalling the end of his career. Becoming embroiled in Lobbygate and Wishawgate and being forced to make a public confessional about his extramarital affair earned him the nicknames Jack the Lad, Slippery Jack and Guilty Jack. But did he deserve them? This is just one question about Scotland’s First Minister’s life that is explored in this unofficial biography. Davidson also examines McConnell’s personal life – his marriage to Bridget and his adoption of her two children.And she charts his, at times, acrimonious relationships with other members of the Labour Party, shedding light on the wranglings between the Westminster contingent of the party and its members in Scotland. This insightful study uncovers a man who presents himself as having his country’s best interests, especially those of its young people, close to his heart. Is this really Jack, the Man? Or is it a carefully cultivated image that conceals an astute political mover whose ambition for power stretches beyond the occupancy of Bute House?

Lorraine Davidson is currently a journalist with the Daily Mirror in London. She has also been the Europe Correspondent and the Scottish Political Editor of the paper. Prior to that, she was the Director of Communications at the Scottish Labour Party in the run up to the first elections to the Scottish Parliament. Lorraine is also a regular commentator on radio and TV.