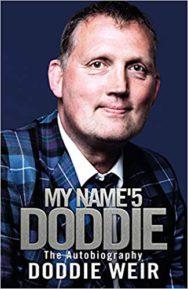 My Name’s Doddie: The Autobiography

There has never been anyone quite like Doddie Weir. A giant of the game and a rugby icon, his story is unique, inspirational and charged with a passion for living life to the full.

In a rugby career which had huge highs and shocking lows, Doddie faced some of the greatest players in the game, from Jonny Wilkinson to Jonah Lomu, Brian O’Driscoll to Scott Quinnell and Martin Johnson to Joost van der Westhuizen, and set stadiums alight when “on the charge like a mad giraffe”. Now, at the age of 48, Doddie is facing an entirely different adversary: Motor Neurone Disease.

But Doddie Weir has never been one to shy away from a challenge, on or off the pitch, and he has faced up to MND with undaunted positivity, using his boundless energy to raise funds for MND research and support, with more than £1million already raised and committed in the first year.

My Name’s Doddie Weir is a courageous and hugely entertaining celebration of a remarkable life being lived to the max. You will laugh, you may cry, but Doddie’s story is an absolute must-read – rugby fan or not.

Co-author Stewart Weir is a former sports reporter at the Evening Times, chief sportswriter at the Scottish Mirror, and Head of Sport at the Herald & Times Group. He was also deputy editor for official publications at the 2014 Commonwealth Games. Stewart has also worked extensively in PR, for governing bodies, and, individual clients such as Sir Chris Hoy, Stephen Hendry and Ronnie O Sullivan. He is also a regular on talkSPORT.