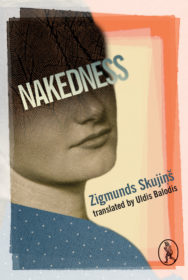 Set in the 1960s, Nakedness is the tale of a young man who has just completed his military service and gone straight to Randava to surprise Marika, the beautiful woman with whom he’s been corresponding for some time. The two have never met in person however, and when the young man arrives at her door, he quickly becomes entangled in a bizarre mystery: Marika claims that she has never written to him; in fact, she appears to be involved with someone else. And none of her flatmates will admit to sending the letters.

Humiliated, he prepares to return to Riga, but is convinced by one of Marika’s flatmates to stay a little longer – a decision that throws him even deeper into the web of conflicting relationships he has unwittingly entered. Each clue he uncovers only makes things more confusing, and eventually the young man’s own secrets and mendacity are also revealed. The nakedness that results from being deprived of our deceptions can be unpleasant, but it may be a necessary part of growing up and facing the world.

Skujiņš is an original stylist capable of deploying acute psychological observation as well as clever and often witty imagery, and Uldis Balodis has managed to retain this in his excellent English translation. This novel will introduce the reader to a different world precisely because of the writing and the freshness of the dialogue, and not so much for the society it depicts, which resembles in some ways the mass society that also existed in Western Europe at the time, reminding us that even in those more hopeful times, the human condition was still a struggle with desires, ambitions and the image of ourselves we wish to project.

Zigmunds Skujiņš, one of Latvia’s leading writers of the late twentieth century, was born in the Latvian capital, Riga, in 1926. Author of ten novels and fifteen short story collections, Skujiņš has had his works translated into many languages (over seven million copies of his works have been sold in more than a dozen languages). Skujiņš has received many honorary titles, including Emeritus Member of the Latvian Academy of Sciences (1998), and many awards, including the Latvian Annual Prize for Literature (2003), the Aleksandrs Čaks Prize (2005), and the Latvian Government Prize for Lifetime Achievement (2007).

Uldis Balodis grew up in Arizona, a descendant of the World War II Latvian refugee community in the United States, and is a native speaker of Latvian and English. Languages have fascinated him his entire life and he has studied over thirty of them, including Navajo, Sanskrit and Sámi. He holds a PhD in linguistics and has a particular interest in endangered and lesser-spoken languages. As a translator, he has worked with a variety of literary genres, both fiction and non-fiction. His translation of Rūdolfs Blaumanis’s In the Shadow of Death (Paper + Ink) was published in 2018 as was Trillium (Līvõ Kultūr sidām; Liiviläisten ystävät ry), the first-ever poetry anthology in English and Livonian, an endangered Finnic language native to Latvia, for which he was a contributing translator.