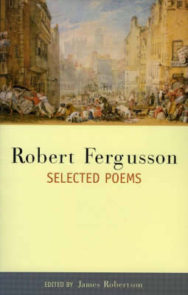 Originally published in 2000 by Polygon to mark the 250th anniversary of Fergusson’s birth, this new edition contains all Fergusson’s finest poems in both Scots and English, and features a new introductory essay, revised orthography, a substantial section of notes and a glossary. Acknowledged as a crucial influence on Burns, Robert Fergusson was a remarkable poet in his own right. All his work was produced during a few brief years, delighting readers with its vigour and power. Although he wrote much verse in the then fashionable style of Augustan English, it is his Scots verse which, in its great warmth, humanity, satire, and hilarious comedy, is his enduring legacy. His work covers the whole gamut of human emotions and experience and his subject matter ranges from drunken encounters with the notorious City Guard to quieter reflections on pastoral themes. Fergusson died in 1774 at the age of only 24.

James Robertson is a writer of the highest quality. His second novel, Joseph Knight, won the two major Scottish literary prizes in 2003/4 – the Saltire Scottish Book of the Year and the Scottish Arts Council Book of the Year. He has also published stories, poetry and anthologies. He was the Scottish Parliament’s first writer in residence and lives in Angus.