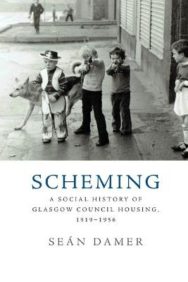 When the Corporation of Glasgow undertook a massive programme of council house construction to replace the city’s notorious slums after the First World War, they wound up reproducing a Victorian class structure. How did this occur? Scheming traces the issue to class-based paternalism that caused the reification of the local class structure in the bricks and mortar of the new council housing estates.Sean Damer provides a sustained critique of the Corporation of Glasgow’s council housing policy and argues that it had the unintended consequence of amplifying social segregation and ghettoisation in the city. By combining archival research of city records with oral histories, this book lets the locals have their say about their experience as Glasgow council house tenants for the first time.

Reviews of Scheming: A Social History of Glasgow Council Housing, 1919-1956

Sean Damer's book is a vital guide to the new estates – called 'schemes' in Scotland, hence the title – built between the wars and those built in the decade after 1945. It's a deeply engaged social and political history, of interest not only to Glaswegians but to anyone seeking a critical understanding of council housing, its successes, failures and complexities… I recommend the book not only as rich and challenging account of council housing built at scale in one of our major cities but as a significant contribution towards our wider understanding of how to build badly and how to build well.–Municipal Dreams