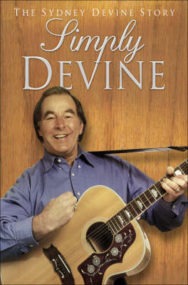 The sensational autobiography of showbiz legend Sydney Devine With the celebration of fifty years in showbiz, the legendary Sydney Devine has reached a milestone in his career. The Lanarkshire lad began singing on stage at the tender age of fifteen, treading the boards in London. Before long, he would become a household name, cementing his reputation in recent years as Scotland’s very own Rhinestone Cowboy thanks to sequinned jumpsuits, line dancing, ten-gallon hats and hit songs such as ‘Tiny Bubbles’. Over the decades, he has met all the greats, from Dolly Parton to Tommy Cooper and the Jackson Five. And, along the way, he has sold an incredible fifteen million records. Sydney also had his moment with royalty when, in 2003, the Queen awarded him an MBE for his tireless work for charity. But he was to pay a heavy price for all his fame and success, suffering a near-fatal heart attack that would change his life forever. In Simply Devine, Steak ‘n’ Kidney, as he is affectionately known to his legions of die-hard fans and fellow performers, chronicles his rise to stardom.The son of a miner, he recalls the many eventful ups and downs of his long career that culminated in that visit to Buckingham Palace. He tells the story of what, at times, has been a turbulent life and, for the first time, reveals what went on behind the scenes as well as on stage.