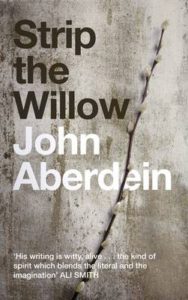 ‘Before you could sort a city out, you had to clean up the source’. That is the challenge Lucy faces…For years she made that common mistake: her heart was blocked, she thought she was alone. Now, as predatory LeopCorp gets set to pounce on a bankrupt Uberdeen, her quest for fellow-resisters has to speed up pronto. Feisty Alison? Subtle anarchist Iris? Ruthless young Gwen? The big fisherman with a chip on his deck, the Cretan professor – or the smart anti-capitalist clowns? Perhaps the overcrowded Polish workers – or the wounded haunting stranger that has rolled back into town? Or is Lucy simply past it? Might as well retreat to Morocco and let GrottoLotto take over the streets for a new global bonanza…? Black political satire meets salty, funny love story. “Strip the Willow” reveals itself as a dance of vision, desire, plotting and despair. The apocalypse when it comes is pretty damn sharp, the tenderness real. A vivid, breathtaking tale, “Strip the Willow” is the long-awaited second novel by the author of Saltire award-winning “Amande’s Bed”.

Born in Aberdeen, the author has worked as fisherman, teacher and political campaigner in North-East Scotland, London, Fife, Hampshire, the West Coast and Orkney. John Aberdein’s early stories were edited by Duncan McLean in Ahead of Its Time (Jonathan Cape, 1987) John Aberdein’s story Moving was a prize-winner in the Scotsman & Orange Short Story Awards 2004.