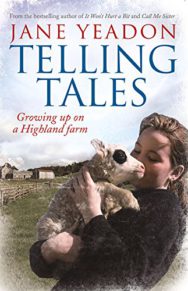 Home > Biography and Autobiography > Telling Tales: Growing Up On A Highland Farm

Telling Tales: Growing Up On A Highland Farm

Growing up on a farm in the north of Scotland could be both rewarding and challenging. Now, bestselling author Jane Yeadon recounts her childhood before her nursing adventures started, in her own unique and entertaining style. Jane and her little sister Elizabeth never had it easy, especially on Mondays. As their mother shut herself away to write her popular newspaper articles on the everyday life of a tenant crofter, the girls were given tasks around the farm by Dod, the farm grieve. On a farm where money was tight, the extra income meant a lot, especially with their father dead after a tragic motorbike accident. As they grow up, the girls start to see life on the farm in very different ways but both know that running a farm demands hard, physical toil. And it’s often from them. In a world where you should either be useful or keep out of the way, Jane finds herself divided between hearing the freedom call of the winds that blow over the moorland farm and those of its ceaseless demands for attention. Telling Tales recounts how Jane learns about her place in the scheme of things, the hard way. Poignant and touching, this nostalgic account of life on the farm recalls a way of life which was so recent but is now all but forgotten.