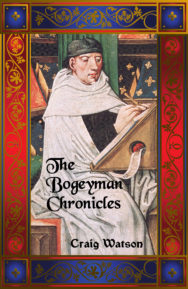 A scribe, a merchant, an earl, of late

A fiery star summons their fate

The mother hag will swear, forsooth

A half-blind man will see the truth

A bogle-man, a Wolf begetter

Slay a son to save a daughter

In 14th Century Scotland the constant fighting of the wars of independence has left the land ravaged and barren.

1327: 6 year old Brodie Affleck, gong scourer at Edzell Castle arrives at Restenneth priory, to become a lay brother and scribe. Arriving with nothing but a scrap of parchment bearing an enigmatic prophecy, Brodie must piece together the mysteries that link him to two of the most infamous men Scotland has ever known.

1335: young Andrew Christie watches in terror as his family and farm are torched by Andrew de Moray’s soldiers. Friendless and alone, Christie and his brother must do whatever it takes to eat and stay alive – even committing an unforgivable sin.

1343: Alexander Stewart, third son of King Robert II, is born amidst persistent rumours of bastardy. Spoilt, barbaric and cruel, Stewart becomes infamous as the Wolf of Badenoch, whose savagery will touch the lives of thousands.

Over 80 years the lives of three men are inextricably entwined, and through their hatreds, murders and betrayals the legend of Christie Cleek, the bogeyman, is born.

Craig Watson is the author of the non-fiction book, The Battle for Hearts and Minds, about Heart of Midlothian FC. He is an established, award winning, journalist who has written extensively for the UK and Scottish national press. In 2002, he set up the Scotnews agency, providing media consultancy and writing services.

Before moving into journalism, he studied Scottish history at Aberdeen University.

The Bogeyman Chronicles is his first novel.