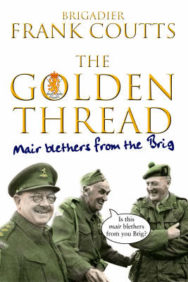 Home > Biography and Autobiography > The Golden Thread: Mair Blethers from the Brig

The Golden Thread: Mair Blethers from the Brig

This is Brigadier Frank Coutts’ thought-provoking and controversial memoir. Brigadier Frank Coutts has had an extraordinary life. Born in Glasgow, a son of the manse, he left Scotland to become a London policeman before joining the army at the start of the Second World War. He was commissioned into the King’s Own Scottish Borderers and after an eventful war rose to the rank of Brigadier and was Colonel of the Regiment for ten years. He also played rugby for Scotland and is a Past President of the SRU. In “The Golden Thread”, Frank Coutts looks back over the events of his life and, in particular, the events of the last twenty years and sets out his often controversial views on the state of the nation. He is incensed by the Blair government’s army reforms that will mean the end for the KOSB after more than 300 years of glorious history. He also gives his forthright views on the new Scottish Parliament, on Scottish rugby, on the Kirk, on the Royal family and on life in the 21st century. And, after a life well lived, he takes a long hard look at the future for Scotland and the problems we face.Forthright, humorous and heartfelt, “The Golden Thread” is a controversial and thought-provoking memoir.

Brigadier Frank Coutts MBE is one of the most popular and respected soldiers Scotland has produced. A former Colonel of the KOSB, Past President of the SRU, former General Secretary of the Royal British Legion and The Earl Haig Fund, Frank Coutts has been a tireless worker for his regiment and his many charitable interests.