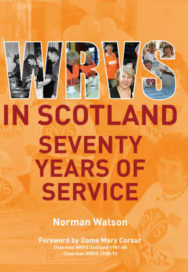 Home > History > The History of the WRVS in Scotland: Seventy Years of Service

The History of the WRVS in Scotland: Seventy Years of Service

16 May 2008, sees the 70th anniversary of the founding of the WRVS as the Women’s Voluntary Services and The History of the WRVS in Scotland is the first history of what has become Scotland’s largest voluntary organisation.It was the memory of Britain’s lack of preparation for German bombing in the First World War that, with war in Europe looming again, convinced the government to recruit women volunteers to help with home defence and air-raid precautions. In 1938 the Woman’s Voluntary Services, later to be the Women’s Royal Voluntary Service and now the WRVS, was formed and, by 1945, it had a million members and was known throughout the country.In Scotland, volunteers organised the evacuation of civilians from danger zones, fed and clothed refugees, collected salvage and made countless numbers of mugs of tea for grateful troops. When members defied both falling bombs and fatigue during The Blitz, their heroic deeds won them the nickname of The Army That Hitler Forgot.Post-war, the organisation pioneered such landmark projects as Darby & Joan Clubs and Meals on Wheels which have transformed Scotland’s social services.And today the WRVS continues that innovation with a range of community projects to help people in need.For 70 years, the WRVS has also been Scotland’s unsung emergency service, trained and ready for major disasters. Never found wanting, it is not for nothing that WRVS has been called the most remarkable women’s organisation in history and this is their remarkable story.

Norman Watson is a journalist with The Courier in Dundee. He has written over 3,000 feature articles and several books including the bestselling Dundee: A Short History (9781845021153) in 2006.