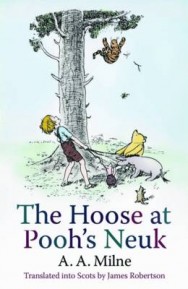 The Hoose at Pooh’s Neuk

By (author) A. A. Milne; Illustrated by E. H. Shepard; Translated by James Robertson

‘I’m Pooh,’ said Pooh. ‘I’m Teeger,’ said Teeger. ‘Oh!’ said Pooh, for he hadna ever seen a craitur like this afore. ‘Does Christopher Robin ken aboot ye?’ ‘Of coorse he does,’ said Teeger. ‘Weel,’ said Pooh, ‘it’s the howe-dumb-deid o the nicht, which is a braw time for gaun tae sleep. And the morn’s morn we’ll hae some hinny for oor breakfast. Dae Teegers like hinny?’ ‘They like awthin,’ said Teeger cheerily. ‘Weel, if they like gaun tae sleep on the flair, I’ll awa back tae ma bed,’ said Pooh, ‘and we’ll dae things in the mornin.’ Following on the success of “Winnie-the-Pooh in Scots”, here comes the second volume of stories featuring Pooh, Wee Grumphie, Heehaw, Hoolet and all the other creatures of the Forest, and introducing the strippit bampot Teeger. “The House at Pooh’s Corner” was first published in 1928 and is a classic of children’s literature. This edition contains the original Ernest Shepard illustrations.

James Robertson is the General Editor of Itchy Coo and a contributing author to many Itchy Coo books. He has translated classics by Roald Dahl and A A Milne into Scots. He also writes for adults and has published three novels, including the bestselling The Testament of Gideon Mack.