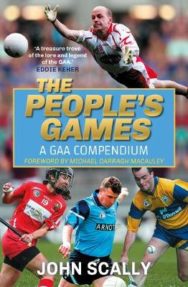 The People’s Games: A GAA Compendium

For over 130 years the GAA has been at the heart of Irish life. Since the introduction of television Gaelic Games have become a huge entertainment industry, yet at their core remain deeply embedded in the local community. They shape the nationalconversation and lift the mood of the nation. Hurling, ladies’ football, camogie and Gaelic football are Ireland’s greatest national treasures.The people are the beating heart of the Games and Gaelic Games are part of the DNA of the Irish Race. Now, this comprehensive collection captures the GAA’s evolving history; the fabled heroes; the controversies; the scandals; the pulsating games; the fans; the centrality of the clubs; and the unending and heart-stopping drama.Full of fascinating insights, amusing anecdotes, thrilling tales and new revelations about famous incidents and epic encounters, this volume brings the people’s games alive in all their vibrancy. Based on exclusive interviews this captivating compendium completely captures the rich history of the GAA – not through statistics but in the compelling stories of the men and women who made them happen.

Reviews of The People’s Games: A GAA Compendium

'A book which captures the heart and soul of the GAA.' – KIERAN DONAGHY; 'A treasure trove of the lore and legend of the GAA.' – EDDIE KEHER; 'The GAA has a lot of great people with a strong social conscience and I am delighted to see them celebrated in these pages.' – MICHAEL DARRAGH MACAULEY

John Scally lectures at Trinity College, but in his spare time is a writer and broadcaster. Since 1992 he has written 40 bookswith cumulative sales of over 150,000. He is the author of the biggest selling GAA book in Ireland, Raising the Banner: TheBiography of Ger Loughnane, and for a few years his biography of Tony Ward was the biggest selling rugby book in Ireland.