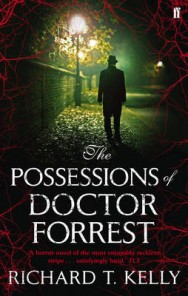 Home > Fiction from Scotland > The Possessions of Doctor Forrest

The Possessions of Doctor Forrest

Three respected Scottish doctors – psychiatrist Steve Hartford, paediatric surgeon Grey Lochran and cosmetic surgeon Robert Forrest – have been close friends since their Edinburgh boyhoods, and now live handsomely in suburban London. But for each, midlife has brought certain discontents, especially for Forrest, a reformed womaniser who broods over his fading looks and the departure of his beautiful younger girlfriend. When Dr Forrest goes missing one summer evening and fails to return, Lochran and Hartford are alarmed by the thought of what might have befallen their friend. The police can find no evidence of foul play, but the two doctors resolve to conduct their own investigation. Soon, however, Lochran and Hartford find themselves bedevilled by bizarre, unnerving events, and the attentions of menacing strangers. Robert Forrest, they come to realise, has remained closer than they could ever have imagined…

Richard T. Kelly was born in Newcastle-upon-Tyne in 1970, and grew up in Northern Ireland. He has authored three acclaimed ‘oral history’ books on film and filmmakers for Faber: Alan Clarke (1998), The Name of This Book is Dogme 95 (2000), and the authorised biography, Sean Penn: His Life and Times (2004). In 2000 he wrote and presented the Channel 4 documentary, The Name of This Film is Dogme 95. He also edited Ten Bad Dates with De Niro: A Book of Alternative Film Lists (2007) and in 2008 his debut novel, Crusaders, was published.