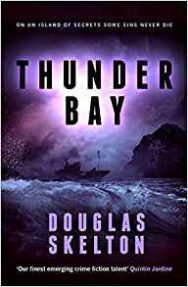 When reporter Rebecca Connolly is told of Roddie Drummond’s return to the island of Stoirm she senses a story. Fifteen years before he was charged with the murder of his lover, Mhairi. When he was found Not Proven, Roddie left the island and no one, apart from his sister, knew where he was or what he was doing.

Now he has returned for his mother’s funeral – and it will spark an explosion of hatred, bitterness and violence.

Defying her editor’s wishes, Rebecca joins forces with local photographer Chazz Wymark to dig into the secrets surrounding Mhairi’s death, and her mysterious last words of Thunder Bay, the secluded spot on the west coast of the island where, according to local lore, the souls of the dead set off into the after life. When another murder takes place, and the severe weather that gives the island its name hits, she is ideally placed to uncover the truth about what happened that night fifteen years before.

Douglas Skelton has published 12 books on true crime and history. He has been a bank clerk, tax officer, shelf stacker, meat porter, taxi driver (for two days), wine waiter (for two hours), reporter, investigator and editor. His first thriller BLOOD CITY was published in 2013. The gritty thriller was the first in a quartet set on the tough streets of Glasgow from 1980 onwards. It was followed by CROW BAIT, DEVIL’S KNOCK and finally OPEN WOUNDS, which was longlisted for the first McIlvanney Prize for Scottish Crime Book of the Year in 2016. His two Dominic Queste thrillers, THE DEAD DON’T BOOGIE and TAG – YOU’RE DEAD lightened the tone but didn’t skimp on thrills. He followed this with his New York-set chase thriller THE JANUS RUN in 2018. His next title will be THUNDER BAY, a dark and atmospheric tale of secrets, lies and murder on a Scottish island. It will be published in March 2019 by Polygon. Douglas is often recruits by documentary makers to contribute to true crime shows on TV and radio and is a regular on the crime writing festival circuit. He also takes part in comedy shows with other crime writers. To date he has written three Carry on Sleuthing plays in which he also appears along with Caro Ramsay, Michael J. Malone, Theresa Talbot, Pat Young and Lucy Cameron, with occasional guests Alex Gray, Lin Anderson and Neil Broadfoot. He is also one quarter of Four Blokes in search of a Plot, along with Gordon Brown, Mark Leggatt and Neil Broadfoot. This is a fun show in which they invited the audience to give them a murder weapon and a protagonist. They then take it in turns to create a crime story (usually developing into something wild and wacky) while also answering audience queries about the craft.