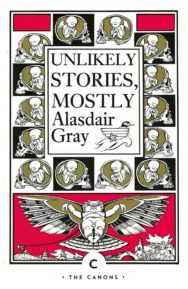 A man finds a bald patch on the back of his head that looks curiously like a face, then discovers he’s splitting in two. A bored student suggests digging a tunnel into the foundations of the art school. An elderly man is healed by hundreds of tiny people working on repairs inside his own head.Unlikely Stories, Mostly is Alasdair Gray’s first collection of short stories. Gloriously illustrated, darkly funny, and steeped in myth and fable, they capture Gray’s singular imagination.

This anthology may be likened to a vast architectural folly imblending the idioms of the Greek, Gothic, Oriental, Baroque, Scottish Baronial and Bauhaus schools. Like one who, absently sauntering the streets of Barcelona, suddenly beholds the breathtaking grandeur of Gaudi's Familia Sagrada, I am compelled to admire a display of power and intricacy whose precise purpose evades me. Is the structure haunted by a truth too exalted and ghostly to dwell in a plainer edifice? Perhaps. I wonder. I doubt — "Lady Nicola Stewart, Countess of Dunfermline * * The Celtic Needlewoman" * * Too clever for its own good in parts, but otherwise a damned good read — "Colonel Sebastian Moran * * Simla Times" * * Gray is a true original, a twentieth century William Blake * * Observer * * One of the brightest intellectual and creative lights Scotland has known in modern times — NICOLA STURGEON A necessary genius — ALI SMITH A series of fantastical fables, showing the influence of Kafka, Swift and Johnson's Rasselas . . . Memorable * * Guardian * * As you'd expect from a writer as talented as Gray, there are enough idiosyncratic pleasures knocking around to make the book well worth reading * * Independent * * His work is masterly . . . Temperamental radicalism, militant humanism and a number of recurring sexual, linguistic and aesthetic themes are woven together into a prose full of recondite allusions and brilliant innovations * * London Review of Books * * Unsettling, otherworldly . . . Not since William Blake has a British artist wed pictorial and literary talent to such powerful effect * * Financial Times * *