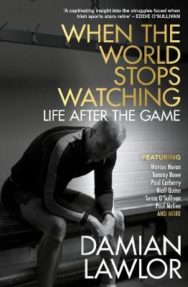 Home > Biography and Autobiography > When the World Stops Watching: Is There Life After Sport?

When the World Stops Watching: Is There Life After Sport?

Who am I now? That’s the dilemma facing many elite athletes when they stop chasingtheir dreams and transition into retirement. Far too young for slippers and often at anage when non-sporting peers are still climbing the career ladder . . .For decades, they’ve trained relentlessly, dedicated to the pursuit of glory – to victoryand to defeat. They’ve made unimaginable sacrifices, sidestepped the trappings of’ordinary’ life, invested blood, sweat and tears to represent their people on local,national and international stages.Along the way they’ve formed tight-knit communities and friendships. Adheringto rigid training schedules, out-of-step with loved ones, they become somewhatinstitutionalised. But such steadfast, single-minded obsession cannot last forever.When that final whistle sounds, these athletes retire, often left behind by fans andteam-mates. An overwhelming uncertainty lingers: ‘What now?’ Post-sport, life isdaunting. From incredible highs to earth-shattering lows. Studies show that 46% ofretired athletes experience depression or anxiety.When the World Stops Watching tells intimate stories of 14 Irish sportspeople. Fromrugby grand slam winners to Olympic boxers, European Tour golfers to World Cupfootballers, from local GAA heroes to international hall of fame winners – offeringfront-row insight into how elite sportspeople fare in their sporting afterlife.With searing honesty, these athletes recount dramatic personal and social changes,from loss of income to loss of purpose. A complex journey of resilience and regret,despair and desolation, fear and fulfilment is undertaken as tentative new beginningsdawn. Woven in are gems of guidance from professionals, academics and experts forthe rocky retirement road that leads to a life beyond sport.

Damian Lawlor is an award-winning author whose books include: I Crossed the Line: TheLiam Dunne Story, All in my Head: The Lar Corbett Autobiography, and the acclaimed Fieldsof Fire. As a broadcaster, Damian works with Sky Sports GAA and RTE Radio One.The Tipperary native works with his county’s under-17 and under-20 footballers. He ismarried with three children.