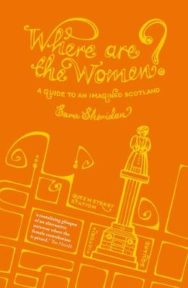 Home > History > Where are the Women?: A Guide to an Imagined Scotland

Where are the Women?: A Guide to an Imagined Scotland

For most of recorded history, women have been sidelined, if not silenced, by men who named the built environment after themselves. Now is the time to look unflinchingly at Scotland’s heritage and bring those women who have been ignored to light.Can you imagine a different Scotland, a Scotland where women are commemorated in statues and streets and buildings – even in the hills and valleys? This is a guidebook to that alternative nation, where the cave on Staffa is named after Malvina rather than Fingal, and Arthur’s Seat isn’t Arthur’s, it belongs to St Triduana. You arrive into Dundee at Slessor Station and the Victorian monument on Stirling’s Abbey Hill interprets national identity through the women who ran hospitals during the First World War. The West Highland Way ends at Fort Mary. The Old Lady of Hoy is a prominent Orkney landmark. And the plinths in central Glasgow proudly display statues of the suffragettes who fought until they won.In this guide, streets, buildings, statues and monuments are dedicated to real women, telling their often unknown stories.

Reviews of Where are the Women?: A Guide to an Imagined Scotland

'stunning . . . a dip in, dip out "alternative guidebook" where Scotland's late, great women are commemorated' * Sunday Post * 'Where Are the Women? provides a tantalising glimpse of an alternative universe where the female contribution is prized.' * Herald * 'a comprehensive, vital portrait of Scotland through a female lens' * The Skinny * 'Charming or amusing though these imagined memorials are, the heart of the book is serious, the product of assiduous research, and extremely interesting. Treat it as a quasi-official gazetteer and it will deepen your knowledge of Scotland, even in many cases of your own city, town, village or countryside, and enrich your travels.' — Allan Massie * Scotsman *

Sara Sheridan, named as one of the Saltire Society’s most influential women, past and present, is known for the Mirabelle Bevan mysteries, a series of historical novels based on Georgian and Victorian explorers, and has written non-fiction on the early life of Queen Victoria. With a fascination for uncovering forgotten women in history, she is an active campaigner and feminist.