An innovative digital exploration of the notable people, places and items in Doubting Thomas.

In the wake of publication of gripping debut novel Doubting Thomas, Vagabond Voices’ immersive digital project, In The Freethinker’s Footsteps, enables readers to experience a taste of Edinburgh’s murky past. In this article the publishers take us behind-the-scenes of this innovative project.

Walking around Edinburgh’s Old Town, it is sometimes easy to feel as if you’ve stepped back in time. The closes and wynds snaking off the Royal Mile can seem like portals; their dark passageways and evocative names pulling you into a gothic past (Fleshmarket Close is a personal favourite). But what would it have really been like to stroll the streets in the 17th Century, when religious doubt could get you locked in the Old Tolbooth? 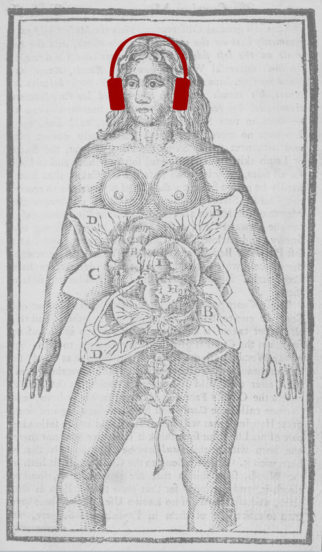 ‘The figure explained: being a dissection of the womb…’. Wood engraving showing woman dissected to expose child in womb.
From The Compleat Midwife’s Companion: Or the Art of Midwifery Improv’d, by Jane Sharp (1724).

With Vagabond Voices’ immersive digital project, In The Freethinker’s Footsteps, you can experience a taste of Edinburgh’s murky past. Using an interactive map of the city, you can uncover soundbites, historical trivia, and stories of sex, drugs and religious outrage at every turn. The project has grown out of Heather Richardson’s novel, Doubting Thomas, which inspired by the fascinating true story of Thomas Aikenhead, the last person to be executed in Britain for blasphemy. Told through four different viewpoints, over a span of fifteen years, the book is intimate but wide-ranging; it not only probes into religious conflict, but also offers insight into 17th Century medicine, law and sexuality. Opening with a grisly autopsy of a pregnant prisoner, the novel is saturated with suspicions of the body and its desires, as well as affairs of the soul.

Vagabond Voices’ digital project stretches the story beyond the bounds of the printed book, to explore the notable people, places and items found in Heather Richardson’s well-researched novel. The interactive map of Thomas’s Edinburgh is not only accompanied by audio clips and quotes, but by a five-episode podcast series exploring different elements of the book. In the first episode – available now online – Stewart Ennis reads Thomas Aikenhead’s final words, written shortly before his execution in 1697. Upcoming episodes will feature discussions with Heather Richardson, Dr Michael Graham (The Blasphemies of Thomas Aikenhead), and Dr Catriona MacLeod, an expert on women in 17th Century Scotland. If it was no longer common to execute people for blasphemy in the late 1600s, what doomed Thomas to such a harsh punishment? What would a woman’s experience have been like at this time? 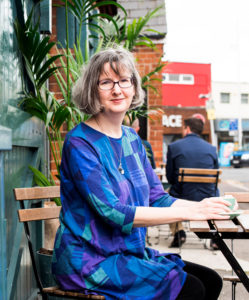 The 17th Century in Scotland throws up a host of questions, riven as it was by religious and political discord. Censorship was rife, with many books branded dangerous for public consumption. Doubting Thomas references many banned texts – the ones that led to Thomas’s arrests for “freethinking”. These are also available as part of In the Freethinker’s Footsteps, under the guise of the Freethinkers’ Library. If you wonder which ideas would have thrown you in jail next to Thomas, you can poke your nose into a clutch of licentious and strange texts, from Christianity Not Mysterious, to the very pamphlet that may have sent Thomas to his death: his classmate Mungo Craig’s A Satyr Against Atheistical Deism: An Account of Mr. Aikenhead.

It might not be possible to walk down a wynd and emerge blinking in 17th Century sunlight, but with In the Freethinker’s Footsteps you can get a couple of steps closer.

You can find In the Freethinker’s Footsteps here. Doubting Thomas by Heather Richardson was published by Vagabond Voices on 26th October 2017 priced £11.95. You can read an exclusive article from Heather, ‘Politics, Potions and Pamphlets in 17th Century Edinburgh’, here on Books from Scotland.

In the Freethinker’s Footsteps was made possible thanks to Publishing Scotland’s Go-Digital Fund.