Scotland from the Sky

‘We were aiming to recreate a pioneering flight made from this same Perthshire aerodrome in 1939.’

It’s not very often that you get the chance to travel back in time.

Through the doors of the aircraft hangar, waiting on the grass beside an apron of runway, was a 1942 DH82a de Havilland Tiger Moth – an open cockpit tandem biplane made of steel tubing, thin plywood and stretched fabric. This was going to be my time machine. 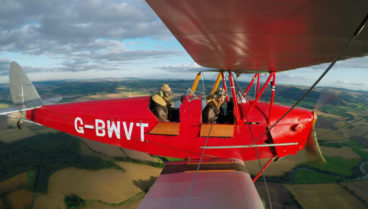 I walked out from the hangar and across the runway with my pilot, William Mackaness. Together, we were aiming to recreate a pioneering flight made from this same Perthshire aerodrome in the summer of 1939. Back then the pilot was a man called Geoffrey Alington, who operated a company called Air Touring. And his passenger was Osbert Guy Stanhope Crawford – now dubbed the ‘father of aerial archaeology’. Crawford’s flight was about travelling back in time too.

The air was almost perfectly still – the aerodrome’s windsock was hanging listlessly from its pole. Beyond, to the north, you could see a wide expanse of farmland and the solid outline of the Cairngorms. The late summer sun was dropping, catching the distant mountains half in light and half in shadow. Set against the flatness of the land they looked somehow artificial, like the backdrop to a theatre set. This sense of unreality was appropriate. On top of my olive-green flight-suit I was wearing a leather and fur-lined Irvin jacket that had once belonged to a Second World War pilot. 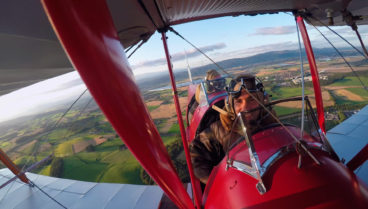 ‘Right now you’ll feel really hot’, William said. ‘But once you’re in the air you’ll be grateful for it’.

William had already begun his starting sequence. ‘There’s something almost magical about it’ he said. ‘It’s a checklist you learn off by heart – a ritual that puts you in a different mindset, that marks the start of your journey.’ First came the ‘walk round’ – feeling the tension in the flying wires, looking at the fuselage for any signs of damage, making sure the wheels were at the right pressure and were free rolling, inspecting the fuel tank above the cockpit – capable of holding 19 imperial gallons; ‘enough for about two and a half hours of flying’ as William explained. Next he checked the oil in the Tiger Moth’s 130hp Gipsy Major Engine. ‘It’s nicknamed the “Dripsy”’, he said ‘because it’s notorious for leaking oil’. A detail that, I confess, I did not want to hear immediately before take-off. 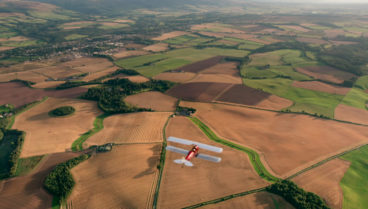 William compared this process to a kind of dance – I could see what he meant. Even climbing into the aircraft had a sequence of set steps: right foot here, left foot there, twist your body this way, grip just that part of the wing – not below or above – left leg over, then lower yourself down to your seat. Why? Because, very simply, if you step in the wrong place there’s a good chance you might put your foot straight through something important…

As I fastened the seatbelt straps over my shoulders and around my waist, William began to, as he put it, ‘tickle’ the engine – first allowing the fuel to flow down to the intake manifold, then drawing it into the engine itself by turning the large single propeller on the nose. The propeller was a startling piece of craftsmanship. And very clearly of another time – a single piece of wood, carved exquisitely into a sort of curved figure-of-eight and lacquered to a smooth liquid shine, with gold-metal trim for the edges that sliced through the air. It brought to mind the fluid, streamlined hull of some vintage speedboat. 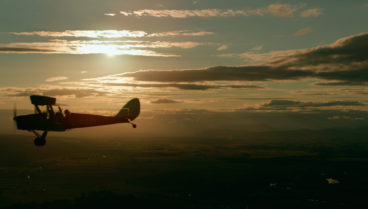 ‘Magnetos off, fuel is on, throttle closed, four blades’, William recited. ‘Four blades’ referred to turning the propeller four times, to ensure that each cylinder takes in the fuel air mixture. Then it was ‘magnetos on’ – creating the electric spark that ignites the engine. With a guttural roar, the propeller in front of me spun to a blur. We sat for a few minutes, letting the engine and the oil warm up, before nimbly taxiing over the grass and on to the runway.

The take-off was remarkably quick. William ramped the engine up to 1600rpm with the breaks still on. Then he gently released the breaks and fed in the throttle, which he controlled with his feet. ‘You need soft shoes for it’ he told me, ‘you have to feel the aircraft, and the power, right in the soles of your feet’. Within seconds we were racing over the tarmac. I pulled the goggles down from my canvas flying helmet as the rush of air tore at my eyes. Another few seconds later, we were up. And we were going back in time. 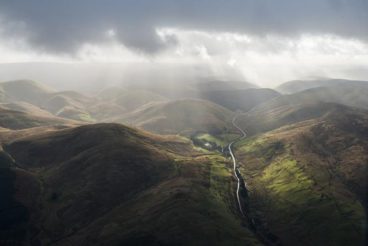 Scotland from the Sky by James Crawford is published on 3 May by Historic Environment Scotland priced £25. All images used here are taken from the book. The book accompanies the BBC documentary series of the same name which will be broadcast in May.