The Irresistible Charm of Scottish Nature

“From the Highlands to the islands Scotland is rich in stunning fauna and flora. Children’s author Lynne Rickards is one of many writers who is constantly moved to pen stories depicting the wild and various creatures that call Scotland home. From wee pufflings to red squirrels, Lynne reveals how her writing draws on the abundance of animal life that dwells in the beautiful Scottish landscape.”

The first children’s story I ever wrote was inspired by a trip to Staffa. This magical island with its basalt columns and a luminous blue-green cave is home to a colony of puffins. If your timing is right (between April and July) you can stride across the grassy top of Staffa and get quite close to the puffins, who seem surprisingly relaxed about human contact. Perhaps this is because they’re standing on the edge of a precipitous cliff! 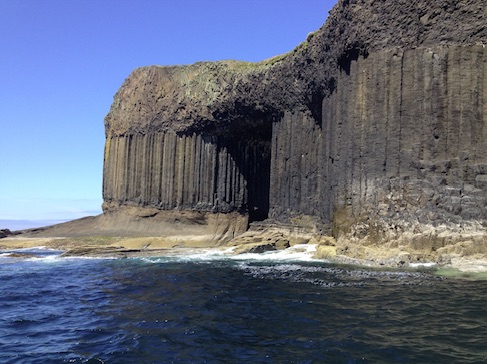 The magical island of Staffa

Puffins are charming little birds, also known as Clowns of the Sea. I didn’t know this at the time, but clearly their colourful beaks and big orange feet gave me the same impression. My first puffin story features a misfit bird called Lewis who, unlike his brother Harris, hates eating fish and is afraid of heights. He longs to be a circus clown, and as Harris points out, his clumsy gait and comical face make Lewis perfect for the job. 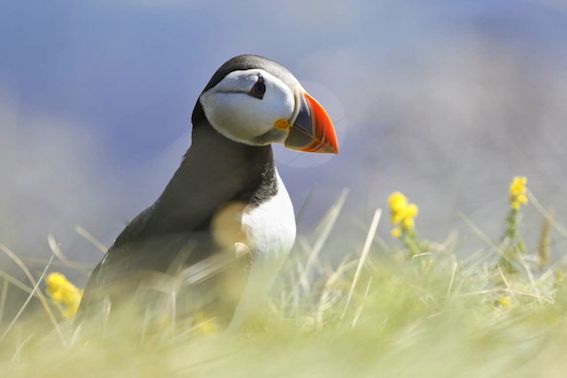 A puffin or Clown of the Sea

Lewis Clowns Around was published in 2011 by Floris Books. The realistic illustrations of the Firth of Forth, rocky cliffs and the Meadows in Edinburgh were beautifully done by Gabby Grant. Two years later she illustrated the sequel, Harris the Hero,  a story about the brother who has been left behind. Harris flies over a coastal vista of Anstruther and Crail, helps rescue a baby seal and ends up happily paired with a puffin called Isla on the Isle of May.

The final image of Harris and Isla shows a fluffy little puffling between them, so naturally the next book would focus on their baby. By this time Gabby was busy with her own offspring, so the third puffin story, Skye the Puffling, was illustrated by Jon Mitchell. In each case, a great deal of research into the habitat and behaviour of the Atlantic puffin in Scotland is what gives these books their authenticity. 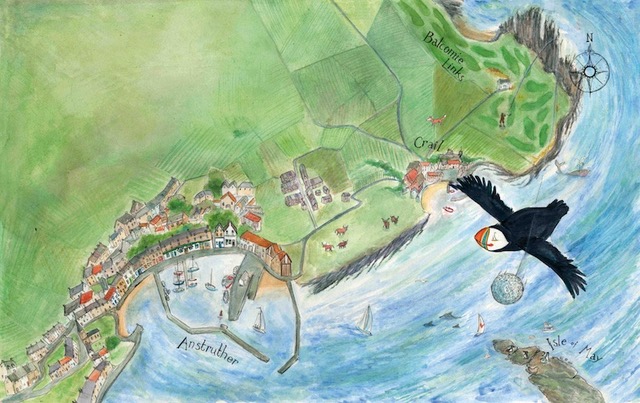 My most recent book for Floris features another irresistible Scottish native, the red squirrel. In Rowan the Red Squirrel we have a young brother and sister, Rowan and Hazel, who venture out on their first exploration of the forest on their own. “Remember what Mum said – watch out for the fox!” calls Rowan as his sister hops out of sight. The forest holds all sorts of surprises for the pair, including scary encounters with a hedgehog, a woodpecker, a fox and an owl. Jon Mitchell has captured all these woodland creatures with great charm, and I’m inspired to get out into the Scottish countryside to see red squirrels in the wild. Maybe I’ll get some ideas for a story about Hazel…

Lynne Rickards was born in Canada and now lives in Scotland with her husband and two children. She grew up reading Dr Seuss books and as a result she loves writing in rhyme. She is the author of the Puffin Adventures Picture Kelpies: Lewis Clowns Around, Harris the Hero, Skye the Puffling. Skye the Puffling was recently adapted into an abridged board book as part of the Wee Kelpies series – Skye the Puffling: A Wee Puffin Board Book. Her latest picture book about family of red squirrels, Rowan the Red Squirrel, is out now.

A Pattern of Secrets

“I created A Pattern of Secrets: The Tour because I wanted to encourage pupils to go beyond the clas …

‘Rocks along the path were inscribed with a phrase from a Sorley MacLean poem: “I saw the little tre …