Talking History: A Q & A with Joan Haig and Joan Lennon

PART OF THE Departure Lounge ISSUE

‘While we cast on and off, she played us famous orations, and sometimes music, on her vinyl record player.’

We love a little bit of history here at BooksfromScotland, and if you’re interested in starting off the young ‘uns on their journey to becoming history buffs, then we highly recommend Talking History: 150 Years of World-changing Speeches as a great starting point. We caught up with authors Joan Haig and Joan Lennon to chat more about the gorgeous history book.

Hello Joan and Joan! Your 2022 has already got off to a cracking start with the publication of your children’s book, Talking History. Can you tell us how the collaboration came to pass?

Joan H.: Thanks – we’re excited to be chatting to you about it. We met at Moniack Mhor Creative Writing Centre in the Highlands – I had signed up for a retreat to start my novel and Joan Lennon was one of the tutors. We kept in touch after the retreat. The collaboration was an exciting new direction for both of us – Joan Lennon had many published children’s books to her name already, but not nonfiction.

Joan L.: Yes – a whole new area! A book about speeches was Joan Haig’s idea originally, but when she invited me on board, I jumped at it! We’re both excited about words and how they work, and also about telling stories. Non-fiction is another way of telling stories – and illustrated non-fiction adds another dimension as well. We started drawing coloured pen pictures of what we thought the book might look like on big sheets of paper on Joan Haig’s kitchen table. We were so excited – and so rubbish! Thank goodness they asked André Ducci to do the artwork!

You’ve both written books individually too. How was the switch to being co-authors? How have you found collaborating on the project?

Joan L.: Everything about writing non-fiction is collaborative, and that takes some getting used to! The two Joans worked together on whittling down the list of chapters, and the editorial team and the marketing department also made suggestions. When the list was agreed, we divided the chapters between us to write. Our editors worked on the text we submitted. There was the collaboration with the designer and the illustrator who created layouts into which the texts needed to fit. Then there were sensitivity readers and an overall external reader. Collaborating is a full-time exercise in the world of non-fiction!

If everybody who worked on the book was on the front cover if would have to be twice the size. Two Joans and an André plus everybody else make a good team – a good team that is going to be working together again very soon… watch this space!

Joan H.: I enjoyed the collaborative process. Having a co-author and editor to share ideas with was helpful. Going into the project I was fairly confident that I knew how to write nonfiction – although new to children’s writing, I’d had several papers and chapters published in academic journals and books. I quickly learned, however, that things I might have taken 5000 words to analyse in an academic paper, I had somehow to condense into 50 words for this readership! Having an experienced wordsmith like Joan Lennon, two sharp-eyed editors (both ruthless with wordcount!), plus a team of issue-specific consultants was, therefore, fantastic.

The histories you share are shaped by speeches. How did you decide which speeches to write about?

Joan L.: We wanted speeches that were inspiring, with a spread of time and gender and geography, but the question of copyright also had to be taken into account. Not every speech we were excited about was available to use in a book such as ours. But we were more than happy with the final chapters!

In the introduction you mention a knitting teacher who played you speeches in her class. Can you tell us more about that wonderful memory?

Joan H.: Mrs. Chamberlain was my Religious Education teacher, who took a catholic (with a small ‘c’) approach to her subject. It was the mid 1990s and she taught us to knit a special pattern of jumper for children in Africa suffering from hunger and drought. While we cast on and off, she played us famous orations, and sometimes music, on her vinyl record player. One clear memory is of the whole class falling silent – knitting needles paused – in the final section of ‘I Have a Dream’ by Martin Luther King, Jr. We abandoned the knitting and talked about the Civil Rights Movement. It was one of those magical classes where nobody wanted the bell to ring!

The book covers the last 150 years of international history. What prompted the decision to stick to modern history?

Joan L.: There are SO MANY amazing speeches! We had to narrow them down to 16 for the book, and the starting point of 150 years ago was one of the ways we did that. 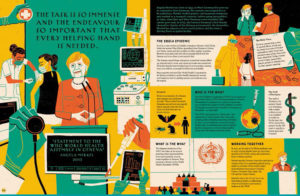 It is a beautiful book too, with such vibrant illustrations. Can you tell us a little more on working with the illustrator Andre Ducci?

Joan L.: It’s fabulous, isn’t it! And working with a designer and an artist has been a real eye-opener. The way image and story work together to make something more than just image or story on their own is magical.

Joan H.: I agree – the book is beautiful. There’s a luxurious quality to the paper, which is matt and suits the bold style.

We worked mostly with the editors, Lydia Watson and then Carly Blake, and the inhouse designer, Adam Allori, who would then work with André Ducci. There was usually some back-and-forth as text was edited or when we were dealing with sensitive topics – but really not much. They are wizards! Receiving the ‘scamps’ (Adam’s initial sketches) and then the ‘roughs’ (André’s initial illustrations) was one of the most exciting parts of the process.

We’re at the beginning of 2022, the year that has been designated the Year of Scotland’s Stories. If you could pick a favourite speech from Scotland’s history, which would you choose?

Joan L.: I’m going to choose the speeches of George Macleod. He was a passionate speaker on all sorts of issues – pacifism and CND, crofting, unemployment, the Green Party. I first came to Scotland in 1978 to work at the Abbey on Iona for a year, and the place was imbued with the practical humanity of his vision. Bringing unemployed workmen from poverty-stricken areas of Glasgow to rebuild the Abbey in the 1930s is definitely one of Scotland’s inspiring stories.

Joan H.: Sticking with modern history, I would choose the first speech given in Parliament by Winne Ewing, in 1967. As one of only four female MPs in Scotland, she was a trailblazer. In her address she said, ‘I am absolutely on the side of youth.’ And she was. She asked politicians and the wider public to listen to young people and to treat them with greater respect. Scotland has done well with this, but Ewing’s message is still relevant: we need to continue to work on representation so that youth from all sectors of society feel their voices are being heard.

‘I want to feel the benefits of time, to reap the rewards of growing older and reflecting, and to de …

‘Queer data is a powerful weapon; in the right hands, it can reshape all of our futures.’