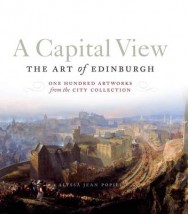 Home > Uncategorized > A Capital View: The Art of Edinburgh: One Hundred Artworks from the City Collection

A Capital View: The Art of Edinburgh: One Hundred Artworks from the City Collection

Edinburgh boasts one of the largest and most diverse collections of art of any city in Britain. In this book, Alyssa Poppiel features a hundred artworks from the city collection, from the Enlightenment to the present day, which feature Edinburgh and its surroundings. All are accompanied by extended captions which set the context and provide a huge amount of lively historical and anecdotal material. Artists include: John Slezer, Paul Sandby, Henry Raeburn, Alexander Nasmyth, Walter Geikie, David Roberts, Sam Bough, John Bell, James Paterson, Francis Cadell, William Crozier, Stanley Cursiter, Jessie M. King, Anne Redpath, John Bellany

Alyssa Popiel grew up on Corstorphine Hill, Edinburgh. In her mother’s antique shop she discovered strange objects, books of old and listened to many a tale and song. After studying History of Art (MA Hons) at Edinburgh University, she worked as an arts researcher for BBC Scotland. She now works as a freelance researcher.