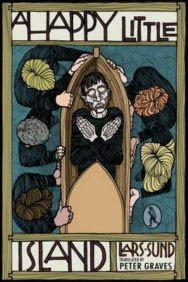 In the beginning the page was blank and without form, and the scribe sat in front of it, a world forming inside his head. The world grew large, spilling out of him and on to the page. The scribe shaped the world into an island. He named it Fagero, and populated it with an assortment of likely and plausibly unlikely characters, and saw that it was good for his purposes.The people of Fagero were often divided against each other but united in their appreciation of their happy little island. Then the dead bodies began to arrive: hordes of them, washing ashore with no identification and no one to claim them.The island was changing, and the small-town quirkiness becoming less restrained. And the bodies kept arriving, forcing Fagero’s inhabitants to confront the unhappy truth that, even on their remote island, the world’s horrors and injustices could not be ignored. This was prescient at the time of writing and is sadly relevant in 2016, the year of this English translation.A Happy Little Island is an elaborate tale told with style and intelligence.The number and variety of Sund’s Dramatis Personae make Fagero the perfect stage for an encounter between common humanity and the insularity and fear of change that affect all cultures.

Born in 1953, Lars Sund is a Finnish writer from the Swedish-speaking border town of Jakobstad, and his eight novels have all been written in Swedish. His last five novels have been translated into Finnish, and A Happy Little Island (En lycklig liten o, 2007) is his first book to be translated into English. Claes Olsson made a film called Colorado Avenue, based on Sund’s books Colorado Avenue and Lanthandlerskans son. Colorado Avenue won two prestigious prizes for Finnish literary fiction: the Runeberg in 1992 and the Kiitos kirjasta-mitali (Thanks-for-the-Book Award) in 1993. Lanthandlerskans son took the Lars Widding Award in 1998, while Sund was nominated for the Finlandia Prize in 1997. Lars Sund, who studied English, Swedish and comparative literature at the Abo Akademi, the only exclusively Swedish-language university in Finland, now resides in Uppsala, Sweden.