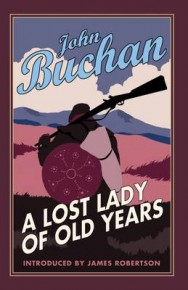 Home > Fiction from Scotland > A Lost Lady of Old Years

A Lost Lady of Old Years

Once described as ‘a tale of adventure and betrayal on the long bloody road to Culloden Moor’, A Lost Lady of Old Years is set in Scotland during the Rebellion of ’45. Young Edinburgh-born Francis Birkenshaw cares nothing for the Jacobite cause until an encounter with the beautiful wife of Bonnie Prince Charlie’s secretary, Mrs Margaret Murray, leads to a dangerous involvement with her husband, John Murray of Broughton, an infamous turncoat. A dark and compelling portrayal of the Jacobite Rebellion.

Reviews of A Lost Lady of Old Years

'Buchan was a master of the simple sentence, a superb scene setter with a sense of place, who is up there with Stevenson and Scott.' THE SCOTTISH DAILY MAIL

John Buchan was a Scottish diplomat, barrister, journalist, historian, poet and novelist. He published nearly 30 novels and seven collections of short stories. He was born in Perth, an eldest son, and studied at Glasgow and Oxford. In 1901 he became a barrister of the Middle Temple and a private secretary to the High Commissioner for South Africa. In 1907 he married Susan Charlotte Grosvenor and they subsequently had four children. After spells as a war correspondent, Lloyd George’s Director of Information and Conservative MP, Buchan moved to Canada in 1935. He served as Governor General there until his death in 1940.