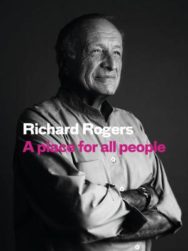 A Place for All People

Richard Rogers is one of the pre-eminent architects of his generation, whose approach to buildings is infused with his love of life, strong sense of social justice, and his playful aesthetic sense. From the Pompidou Centre in Paris to the Lloyds Building in the City of London, and from his inspirational Maggie’s Centre for cancer sufferers to his Y:Cube housing for homeless young people, he has – by thinking his way from the outside in – turned what architecture can do inside out. A Place for All People is both the engaging and inspirational story of Richard Rogers’ life as an architect and simultaneously a book about creating a better society by creating better places to live. Ranging backwards and forwards over a long and creative life, and integrating relationships, projects, stories, collaborations and arguments with case studies, drawings and photographs, A Place for All People is a dazzling and inspiring book as original as its author.

Richard Rogers was born in Florence in 1933. He was educated in the UK and then at the Yale School of Architecture, where he met Norman Foster. Alongside his partners, he has been responsible for some of the most radical designs of the twentieth century, including the Pompidou Centre, the Millennium Dome, the Bordeaux Law Courts, Leadenhall Tower and Lloyd’s of London. He chaired the Urban Task Force, which pioneered the return to urban living in the UK, was chief architectural advisor to the Mayor of London, and has also advised the mayors of Barcelona and Paris. He is married to Ruth Rogers, chef and owner of the River Cafe in London. He was knighted in 1991 by Queen Elizabeth II, and made a life peer in 1996. He has been awarded the Legion d’Honneur, the Royal Institute of British Architects’ Royal Gold Medal, and the Pritzker Prize, architecture’s highest honour.