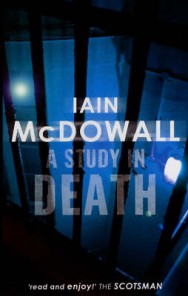 Home > Fiction from Scotland > A Study in Death

A Study in Death

Dr Roger Harvey, a high-flyer headed for the academic first division, has pursued his career and women with equal passion. But now he’s just another murder statistic; his body has been lying in his flat for four days when a small-time burglar literally stumbles over it on his way out with the stereo. DS Ian Kerr and DCI Jacobson of Crowby CID can discern no obvious motive. Harvey didn’t do serious drugs or have a criminal record. Not even Harvey’s closest friends, John Kent and his beautiful wife, Annie, seem able to throw any light on the situation. Despite Jacobson’s dependence on booze and fags, and the fact that Kerr’s marriage is disintegrating faster than his boss’s liver, the two men are experienced policemen. But to solve the case they have to untangle the dark threads of a mystery which threatens to unravel in seemingly every direction …

Reviews of A Study in Death

A lean, impressive debut. THE WASHINGTON POST, USA Smart cop, tough cop combinations seem to be all the rage just now and DS Ian Kerr and DCI Frank Jacobson of Crowby CID are no exception. McDowall has come up with a pair who could hold their own with Dalziell and Pascoe THE NORTHERN ECHO, UK

Iain McDowall is Scottish and was born in Kilmarnock. For more information, visit www.crowby.co.uk.