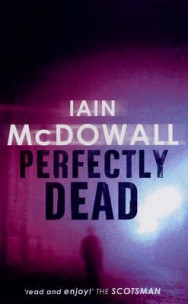 Chief Inspector Jacobson hates drug-related cases. Not least because it means he has to work with the drug squad. But there’s no alternative when a local dealer turns up burnt, battered and dead. Just another hopeless, pointless sink estate incident in the middle of a grey, Crowby February. But even so Dave Carter’s torched body is the stuff of bad dreams. Death doesn’t get any grimmer, Jacobson thinks. But that’s because Jacobson, DS Kerr and Crowby CID are still forty-eight hours away from the ‘Perfect Family’ killings …five dead in a leafy suburb where bad things aren’t supposed to happen. And the only witness may never speak again.

Read and enjoy! THE SCOTSMAN Wonderfully characterised. Andrew Taylor, bestselling author of THE AMERICAN BOY Perfectly Dead is Iain McDowall's third Crowby novel, and it is his best so far. SHOTS MAGAZINE, UK

Iain McDowall is Scottish. He was born in Kilmarnock. Visit Iain McDowall’s website at www.crowby.co.uk