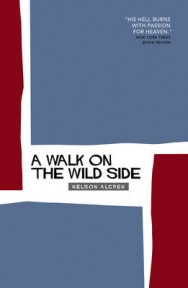 Home > Fiction from Scotland > A Walk on the Wild Side

A Walk on the Wild Side

Dove Findhorn is a naive country boy who busts out of Hicksville, Texas in pursuit of a better life in New Orleans. Amongst the downtrodden prostitutes, bootleggers and hustlers of the old French Quarter, Dove finds only hopelessness, crime and despair. His quest uncovers a harrowing grotesque of the American Dream. “A Walk in the Wild Side” is an angry, lonely, large-hearted and often funny masterpiece that has captured the imaginations of every generation since its first publication in 1956, and that rendered a world later immortalised in Lou Reed’s classic song.

Reviews of A Walk on the Wild Side

"Deserves to be read by every Catch-22 and Cuckoo's Nest freak" ROLLING STONE "The intensity of his feeling, the accuracy of his thought, make me wonder if any other writer of our time has shown us more exactly the basis of our democracy. His hell burns with passion for heaven." NEW YORK TIMES BOOK REVIEW "Mr. Algren, boy, you are good." ERNEST HEMINGWAY"

NELSON ALGREN was born in 1909 in Detroit and lived mostly in Chicago. He was the author of five novels, including Somebody in Boots and Never Come Morning. He was also a prolific writer of short stories, essays, travelogues and poems. In 1949 The Man with the Golden Arm earned him the first American National Book Award. His life was a succession of compulsive gambling, disastrous marriages and wild extremes. He also had a passionate love affair with Simone de Beauvoir while she was living with Jean-Paul Sartre. Algren died in 1981, shortly after being appointed as a fellow of the American Academy and Institute of Arts and Letters.