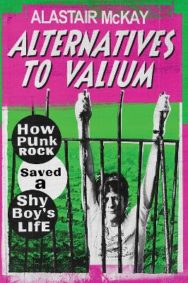 Alastair McKay grew up in the fading Scottish seaside town of North Berwick in the 70s. The cinema and outdoor swimming pool were on the verge of closing, there were scary boys in the park, and excitement was scarce.An exceptionally shy boy, Alastair gradually found his voice through the punk explosion: the ethos that ‘anyone could do it’ prompted him to start writing, largely because it was easier than talking. He also sang in a number of bands, one of which, The Commercials, made a record that was tipped by Sounds magazine to be ‘big in 1982’. It wasn’t.From these hesitant beginnings, he would go on to a successful career in journalism: sharing a limousine with Kate Moss, meeting Iggy Pop at the Chateau Marmont, being led astray by Tilda Swinton and many, many other encounters.

Alastair McKay is a journalist living in London. He grew up in North Berwick, Aberdeen and Edinburgh. He currently writes for the Evening Standard in London, and Uncut magazine. He has worked for The Scotsman, Scotland on Sunday, The Sunday Times, The Guardian, Black Book, Out, Blah Blah Blah and The Independent. He lives in London.