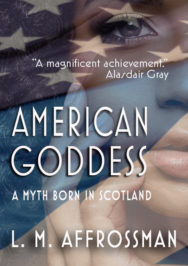 Home > Fiction from Scotland > Contemporary Fiction > American Goddess: A myth made in Scotland

American Goddess: A myth made in Scotland

In this provocative and thought-provoking novel, Affrossman takes a look at the nature of modern day belief.

Post pandemic, Peter Kelso and his wife, Ellisha, have moved to Edinburgh in a last desperate bid to get their lives back on track. But things rapidly start to spiral out of control.

Just as there seems no hope, an encounter with Edinburgh University’s most eccentric professor of history leads them to uncover a source of knowledge kept hidden for centuries.

Using this knowledge, known as The Woman’s Secret, Peter sets out to heal a damaged world, and the Internet provides the perfect platform for the new world order to spread. In the midst of this, American, mixed-race, Ellisha is an unlikely messiah, but she becomes the face of a new age and soon everyone is pinning their hopes upon her.

But if they thought The Woman’s Secret would produce a kinder, gentler world, they are in for a terrible shock. As corruption starts to cast its shadow, cracks begin to show and Peter and Ellisha’s reactions are very different to the encroaching threat. As they become embroiled in their own private battles, unseen forces are moving against them.

After working as a columnist for a number of technology magazines, L. M. Affrossman moved to writing fiction full time.

Her internationally published debut novel, The Promise, concentrated on the interplay of relationships across the generations and the secrets they were hiding.

Her second and third novel were historical and focused on intrigues and political machinations at the beginning of the first millenium.

She is also known for her work in drama. Her latest play, Die Unvollendete, is published by the theatre company, Schultz and Schirm.