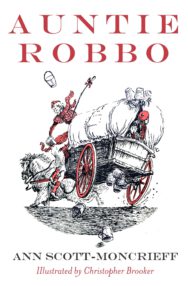 Hector is an 11-year-old boy living near Edinburgh with his great auntie Robbo who is in her eighties. A woman calling herself his step-mother arrives from England and Hector and Auntie Robbo realise that they have to run away. The chase leads all over the north of Scotland, narrowly escaping police and the authorities, adopting three homeless children on the way.

Originally refused publication in London because it was deemed critical of the English, Auntie Robbo was first published in the U.S. in 1940. After success in print it was taken on by Constable in 1959 and later was published in India, South Africa, New Zealand, Denmark and Germany.

Ann Scott Moncrieff was born in Orkney in 1910 and died in Nairn in 1943. During her short life she was a journalist, writer and a poet who was immortalized by Edwin Muir in his poem ‘To Ann’. This is a republication for school-age children of a neglected, talented Scottish female writer of the 1930s.