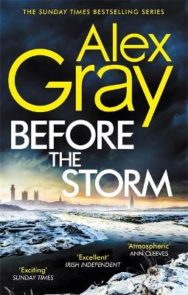 Home > Fiction from Scotland > Before the Storm: The thrilling new instalment of the Sunday Times bestselling series

Before the Storm: The thrilling new instalment of the Sunday Times bestselling series

Your favourite Scottish detective is back with a brand new case, one that threatens to destroy everything.Inspector Daniel Kohi of the Zimbabwean police force returns home one night to find his worst nightmare has been realised. His family dead, his house destroyed, and in fear for his life, he is forced to flee the country he loves.Far away in Glasgow, DSI William Lorimer has his hands full. Christmas is approaching, the city is bustling, and whilst the homicide rate has been relatively low, something much darker is brewing. Counter-Terrorism have got wind of a plot, here in Lorimer’s native city, to carry out an unspeakable atrocity on Christmas Eve. They need someone with local knowledge to help them root it out and who better than the head of the Scottish Major Incidents Team.But the investigation is complicated by a spate of local murders, and by the rumours that someone is passing information to criminal organisations from inside the police force. Soon Lorimer finds himself in desperate need of assistance. Then he meets an extraordinary man – a refugee from Zimbabwe whose investigative skills are a match for Lorimer’s own . . .__________________PRAISE FOR THE WILLIAM LORIMER SERIES’Immensely exciting and atmospheric’ ALEXANDER MCCALL SMITH’Move over Rebus’ DAILY MAIL’Relentless and intriguing’ PETER MAY’Convincing Glaswegian atmosphere and superior writing’ THE TIMES

Reviews of Before the Storm: The thrilling new instalment of the Sunday Times bestselling series

Alex Gray is the Sunday Times bestselling author of the Detective William Lorimer series. Born and raised in Glasgow, she has been awarded the Scottish Association of Writers’ Constable and Pitlochry trophies for her crime writing and is the co-founder of the international Bloody Scotland Crime Writing Festival.To find exclusive articles, reviews and the latest news about Alex Gray and the DSI Lorimer series, visit www.alex-gray.com or follow Alex on Twitter @alexincrimeland.