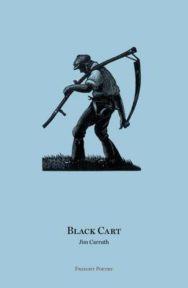 Passing those unmarked crossings and road ends, the horse slowed on its journey but never stopped so Johnny, his song long silent, must’ve slipped off unnoticed, and the others too when their time came, like orchards’ ripe fruit, dropped soft to the ground, disappeared fast down dirt tracks and narrow lanes. Jim Carruth is Glasgow’s Makar, or poet laureate. His debut collection, a poetry novel, Killochries, received widespread acclaim and was shortlisted for the Fenton Aldeburgh Poetry Award for Best First Collection, the Seamus Heaney Prize and the Saltire Poetry Book of the Year Award. Black Cart is Carruth’s second full collection, and continues to draw on his upbringing in the farmlands of Renfrewshire. It’s a meditation on lives richly lived and the approach of winter.

Jim Carruth was born in Johnstone in 1963 and grew up on his family’s farm near Kilbarchan. His first chapbook collection Bovine Pastoral was published in 2004 and was runner up in the Calum MacDonald Memorial Award. He brought out a further five pamphlets and an illustrated fable. In 2009 he was awarded a Robert Louis Stevenson Fellowship and was the winner of the James McCash poetry competition. In 2010 he was chosen as one of the poets showcased in Oxford Poets 2010. In 2014 he was appointed Poet Laureate of Glasgow. Jim Carruth’s debut poetry collection, Killochries, published in 2015, was shortlisted for the Aldeburgh Fenton Best First Collection Award, the Saltire Scottish Poetry Book of the Year and the Seamus Heaney Prize.