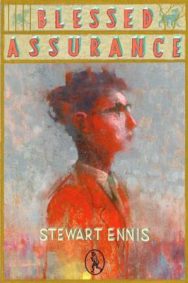 “The fact of the matter is Joseph Kirkland was afraid. Afraid of not being Saved. Afraid of being Saved. Afraid of the transformation that would occur the moment he uttered those words, Jesus! God! I want you to come into my heart!”Blessed Assurance is a coming-of-age novel. It is set against the backdrop of a small close-knit evangelical community in the fictional Scottish village of Kilhaugh during a fog-bound December in the late nineteen-sixties when the Cold War was on the brink of turning hot. The story takes place over six soul-searching days in the life of Godfearing dog-thief and pyromaniac, eleven-year-old Joseph Kirkland, and his godless, devil-may-care best friend, Archie Truman, as the perpetually guilt-ridden Joseph attempts to put right what he believes to be the most terrible of lies. It is peopled with colourful characters, peppered with moments of tenderness, tragedy and occasional surreal humour. At its heart though, Blessed Assurance is an exploration of family, friendship, faith, loneliness and grief, and the compromises that sometimes have to be made to remain part of our community.

Stewart Ennis's debut novel hovers constantly between comedy and tragedy. Small-town Scotland is seen in perceptive detail through the eyes of an eleven-year-old boy. Characters, like his fundamentalist Gran, like the unforgettable itinerant preacher, Benjamin Mutch, leap into our heads and take us over. Steeped in matters of faith and rejection the book offers a rare and fascinating glimpse into a past world which makes you turn the pages in a quest for answers. – Bernard MacLaverty; This, in a nuanced and theological sense, is a sectarian novel that manages to make life within a scripture-centred household appealing rather than appalling as stereotype would so often have it. We meet characters Mark Twain or Flannery O'Connor would have been proud to have begotten. … Blessed Assurance's antecedents include The House with the Green Shutters, Gillespie and Docherty. More recent sources for comparison would be the work of Jeanette Winterson, James Robertson and the poet Iain Bamforth. The earnest, scab-scouring schoolboy dreamer and precocious would-be missionary, Joseph Kirkland, takes his well earned place amongst the many youthful savants and seers populating the coming-of-age stories that predominate in Caledonian letters. – Donny O'Rourke

Born in Bridge of Weir in 1961, Stewart Ennis began his career as a journalist and a nurse, but now works as a writer, actor,lecturer and occasional photographer. For several years he was creative writing lecturer at HMP Shotts and other Scottish prisons, and edited Visiting Time (Vagabond Voices, 2019), a collection of prison writing. He’s had short stories and poems published in Gutter Magazine, The Curlew (Wales), The Caterpillar (Ireland) and various other anthologies. In 2019 he was awarded the Aberdeen-Curtin Alliance scholarship to study a PhD within the creative departments of Aberdeen University and Curtin University, Perth, Australia. Blessed Assurance is his first novel.