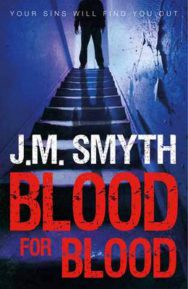 In 1949, on the night of their birth, Robert “Red” Donovan and his twin Sean are placed in an orphanage run by the Catholic Church, and given the name Dock. Aged nine, Red witnesses the kicking to death of Sean by a Christian Brother. At his twin’s deathbed, he vows to one day return his body to their birthplace for reburial. Red’s life is consumed by this vow. It is his driving force to the exclusion of all else. His family, and a garda constable Winters who put the twins into “care”, will be made to pay. Aged 21, Red Dock kidnaps Winters’ new born daughter and leaves her on the steps of an orphanage to be raised by nuns who name her Lucille Kells. But this is not his revenge. Not yet. Revenge will come 22 years later, after Lucille has left the nuns…A powerful novel about monstrous by-products of a terrible system that will make the reader shiver, grieve and think.

Reviews of Blood for Blood

"It's no mean feat for an Irish crime novelist to stand out from the (ever-growing) Celt crime-writing crowd. Yet Seamus Smyth's Blood for Blood succeeds in being something fresh and far darker than the rest." CRAIG McDONALD, bestselling author of the Hector Lassiter series "Cross me bedraggled heart, Blood for Blood just blew me to smithereens. Unbelivable book. Ferocious. Terryfying. Beautifully compassionate. And oh so wonderfully written…" KEN BRUEN, bestselling author of the Jack Taylor series

J.M. Smyth was born in Belfast, and moved to London at the age of 15. He has worked as a landscape gardener, antiques restorer, furniture maker, equeastrian gear manufacturer, horse breeder and a tomato inspector… Smyth finally came to writing – a long time ambition – whilst in hospital following an accident involving an under-sized parachute, and has been at it intermittently ever since. His first novel Quinn was shortlisted for the CWA John Creasy Memorial Dagger. Blood for Blood is his second novel, and has already been published in Japan, France and Germany.