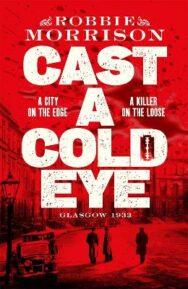 Cast a Cold Eye by Robbie Morrison is a dark historical crime novel and the sequel to Edge of the Grave which won the Bloody Scotland Scottish Crime Debut award and was shortlisted for the CWA Historical Dagger.Glasgow, 1933Murder is nothing new in the Depression-era city, especially to war veterans Inspector Jimmy Dreghorn and his partner ‘Bonnie’ Archie McDaid. But the dead man found in a narrowboat on the Forth and Clyde Canal, executed with a single shot to the back of the head, is no ordinary killing.Violence usually erupts in the heat of the moment – the razor-gangs that stalk the streets settle scores with knives and fists. Firearms suggest something more sinister, especially when the killer strikes again. Meanwhile, other forces are stirring within the city. A suspected IRA cell is at large, embedded within the criminal gangs and attracting the ruthless attention of Special Branch agents from London.With political and sectarian tensions rising, and the body count mounting, Dreghorn and McDaid pursue an investigation into the dark heart of humanity – where one man’s freedom fighter is another man’s terrorist, and noble ideals are swept away by bloody vengeance.

Robbie Morrison was born in Helensburgh, Scotland, and grew up in the Renton, Coatbridge, Linwood and Houston. On both sides, his family connection to shipbuilding in Glasgow and the surrounding areas stretches back four generations and is a source of inspiration for the Jimmy Dreghorn series. One of the most respected writers in the UK comics industry, he sold his first script to publishers DC Thomson in Dundee at the age of twenty-three. Edge of the Grave, the first Jimmy Dreghorn novel, won the Bloody Scotland Debut Crime Novel of the Year, was shortlisted for the Crime Writers’ Association Historical Dagger, and the Fingerprint Awards Debut Book of the Year, and longlisted for the Historical Writers’ Association Debut Crown.