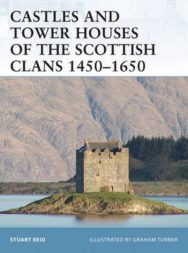 With the exception of the key royal sites, such as Stirling and Edinburgh, few Scottish castles were located at strategic points, or were intended to house garrisons required to defend or subjugate towns. Instead they were primarily fortified dwelling houses, erected in an environment of weak Royal authority and endemic feuding between rival clans and groups, in both Highland and Lowland areas. Although some enceinte castles were developed during the 16th and 17th centuries, most defensive construction focused on the tower house, a distinctive vernacular style of Scottish fortification. This book examines the design, development, and purpose of these quintessentially Scottish buildings, and also covers larger sites such as Urquhart and Blackness.

"This fortress book is a real must for those interested in "reviving and retrieving" in the late 16th and early 17th centuries – a nice twist to the standard English Civil War period. The text is well written and is an easy, fun read and a welcomed addition to this writer's library. I am already in the process of building my own border reivers tower house using this book as a reference!" -"Historical Miniature Gamer"

Stuart Reid was born in Aberdeen in1954. His main focus of interest lies in the 18th and 19th centuries, stemming from his ancestors who served in the British Army and the East India Company and who fought at Culloden, Bunker Hill and even in the Texas Revolution. His previous works for Osprey include the titles on King George’s Army 1740-93 (Men-at-Arms 285, 289 and 292) and the British Redcoat 1740-1815 (Warriors 19 and 20). He is based in Tyne and Weir, UK. Graham Turner is a leading historical artist, specialising in the medieval period. He has illustrated numerous titles for Osprey, covering a wide variety of subjects from the dress of the 10th-century armies of the Caliphates, through the action of bloody medieval battles, to the daily life of the British Redcoat of the late 18th century. The son of the illustrator Michael Turner, Graham lives and works in Buckinghamshire, UK.