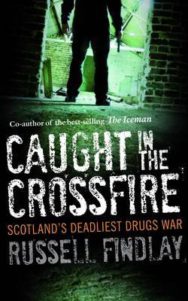 The deadliest Glasgow gang war of a generation – the Daniel family versus the Lyons – was sparked by an opportunistic cocaine theft from a house party which unleashed a decade of murderous violence. Devastation ensued …beatings, slashings, abductions, torture and road-rage murder. Homes were firebombed while children slept; families were ripped apart and witnesses forced into protection. Michael Lyons, 21, was slaughtered when a crime summit at a north Glasgow garage turned into a triple shooting bloodbath, and Daniel lieutenant Kevin ‘The Gerbil’ Carroll, 29, had 10 shots pumped into him outside a suburban Asda supermarket in broad daylight as shoppers fl ed in terror. The desecration of the grave of eight-year-old cancer victim Garry Lyons marked a sickening low. Caught in the crossfire were a band of parents in Milton, Glasgow, who made a brave stand against their community centre being used as a gang hut by the Lyons. Against the odds, they won their six-year battle against routine violence and intimidation and at the same time exposed a shocking and murky nexus between police officers, politicians and the underworld.This is the explosive story of what happened as the Daniel – Lyons feud spiralled out of control and engulfed a whole community.

Russell Findlay is an investigative journalist who has worked in newspapers for 20 years. He is co-author of the bestselling true crime book, ‘The Iceman: The Rise and Fall of a Crime Lord’.