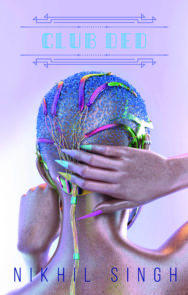 Club Ded is an exhilarating psychedelic-noir. Set in Cape Town, Club Ded stars Brick Bryson, iconic African-American 90s action hero, is fresh out of rehab and shooting the doomed sci-fi blockbuster CLUB DED with his old drinking buddy, bad boy, #metoo’d director, Croeser, in South Africa. But all is not as it seems.

Behind the scenes, operatives of Oracle Inc., an elite, all-female information gathering organisation, have gone rogue. Utilising their vast criminal resources, they’re pushing the interests of a street-level psychedelic drug-cult – spearheaded by the mysterious ex- Nollywood director Fortunato, and his underground ‘reality- revolutionaries’. As the subtropical, fish-derived drug begins to exert an apocalyptic influence in secret, the fabric of time itself begins to unravel.

Meanwhile Jennifer, an Oracle girl, is plagued by nightmares, underwater visions of the future. She falls into a fatal love triangle with the despotic Anita and an outsider: a homeless, ex-classical musician, who has renounced everything in an existential bid to save humanity from itself…

Nikhil Singh is a South African artist, writer and musician. Former projects include the graphic novels: Salem Brownstone written by John Harris Dunning (longlisted for the Branford Boase Award, Walker Books 2009) as well as The Ziggurat (Bell-Roberts 2003) by The Constructus Corporation (now Die Antwoord). His work has also been featured in various magazines including Dazed, i-D Online, Creative Review, as well as Pictures and Words: New Comic Art and Narrative Illustration (Laurence King, 2005). His debut novel Taty Went West was published by Kwani? Trust in 2015, Jacaranda Books (UK) in 2017, and Rosarium (US) in 2018 and was shortlisted for Best African Novel in the inaugural Nommo Awards.