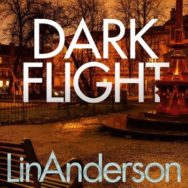 A chilling ritual is being acted out by a sadistic killer in Dark Flight, the fourth novel in Lin Anderson’s forensic crime series featuring Rhona MacLeod.Six-year-old Stephen Devlin has vanished, his mother and grandmother horrifically murdered. At the scene of the devastating crime, forensic scientist Rhona Macleod finds a chilling African talisman, made from the bones of a child.Working with DS Michael McNab, Rhona joins a task force that has been formed in a desperate attempt to track down the missing child before it’s too late. As the case builds momentum, it becomes clear the killer’s motive was linked to the fact that the boy and his mother had recently returned from Nigeria.When further victims are found, Rhona realizes she must decipher the talisman’s meaning if they are to have any hope of finding Stephen before he becomes the next link in the killer’s chain . . .Dark Flight is the fourth book in the Rhona MacLeod series by Lin Anderson.

Lin Anderson is one of Scotland's national treasures – don't be fooled by comparisons, her writing is unique, bringing warmth and depth to even the seediest parts of Glasgow. Lin's Rhona MacLeod is a complex and compelling heroine who just gets better with every outing — Stuart MacBride The best Scottish crime series since Rebus * Daily Record * Forensic scientist Rhona MacLeod has become one of the most satisfying characters in modern crime fiction – honourable, inquisitive and yet plagued by doubts and, sometimes, fears . . . As ever, the landscape is stunningly evoked and MacLeod's decency and humanity shine through on every page * Daily Mail *