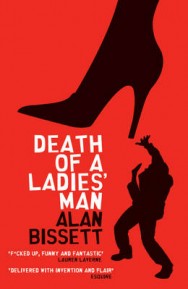 Home > Fiction from Scotland > Death of a Ladies’ Man

Death of a Ladies’ Man

Alan Bissett was born in Falkirk in 1975. His acclaimed first novel, Boyracers, published whilst he was still a student, was based on his adolescent experiences growing up there. His ambitious second novel, The Incredible Adam Spark, was extraordinarily well received. A full-time writer and playwright, he has acted on stage in his own ‘one-woman show’, ‘Times When I Bite’, which was also adapted for film. His plays ‘The Ching Room’, ‘Turbo Folk’ and ‘The Moira Monologues’ have all been recent stage successes. The Shutdown won two Jim Poole awards for Best Scottish Short Film 2009. Alan has also been a support act for Malcolm Middleton, The Vaselines and Zoey Van Goey. He is currently working on his next book, Pack Men, and is much in demand as a live performer of his own work.