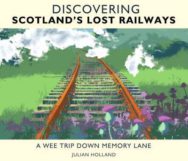 The mid to late nineteenth century was a boom period for railway building in Scotland. Many lines were built, often through sparsely populated areas and with over-optimistic forecasts of a brighter future. Some schemes never even saw the light of day and if they had been built would never have paid a return to their financial backers. Many of those that were built were doomed from the beginning with closures of uneconomic lines in remote areas beginning in the 1930s when competition from road transport started to take its toll. Closure of rural lines gathered pace following Nationalisation of the railways in 1948 but the worst was yet to come. The ‘Breeching Report’ of 1963 spelt the end for many of Scotland’s rural railways and by the end of the 1960s huge swathes of the country had lost their railway service. Built to last by their Victorian and Edwardian engineers much of the infrastructure of these lost lines is still in place – new life for redundant station buildings; cycleways and footpaths following the old track beds, embankments and cuttings; graceful steel bridges spanning the rivers; soaring viaducts striding across the landscape and burrowing tunnels beneath it.Much of Scotland’s lost railway heritage is still out there waiting to be discovered.Researched and written by respected railway author Julian Holland and profusely illustrated with historical and present-day photographs, “Discovering Scotland’s Lost Railways” will open the door to this secret world for the enthusiast as well as those with an interest in Scotland and its transport. Lost railways featured in this book: Dumfries to Stranraer, Connel Ferry to Ballachulish, Spean Bridge to Fort Augustus, Muir of Ord to Fortrose, Boat of Garten to Keith, Elgin to Tillynaught, Banff Inveramsay to Macduff, Kinnaber Junction to Stanley Junction via Forfar Gleneagles to Balquidder, and Dunblane to Crianlarich East Fife Waverley Route.

Author and photographer Julian Holland has a passion for both railways and Scotland. In addition to creating and contributing to many best-selling books on the former subject he has also written ‘Amazing and Extraordinary Railway Facts’ (David and Charles, 2007), ‘Discovering Britain’s Little Trains’ (AA Publishing, 2008), Great Railways of the World (AA Publishing, 2008), and ‘Lost Joy of Railways’ (David and Charles, 2009). As a writer and photographer he has also produced ‘Water Under the Bridge’ (Collins and Brown, 1998). Exploring the Islands of England and Wales’ (Frances Lincoln, 2007) and ‘Exploring the Islands of Scotland’ (Frances Lincoln, 2008).